The Church of the Madeleine 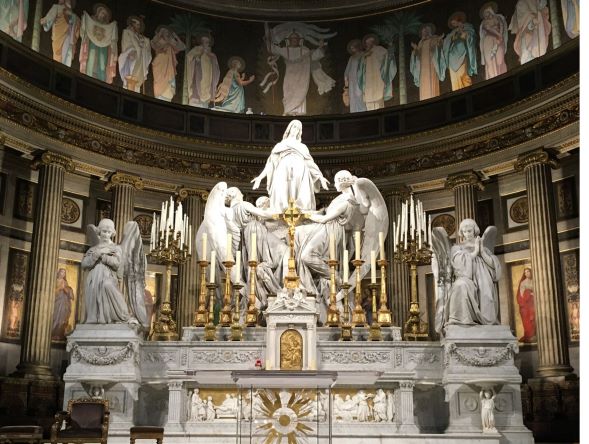 The imposing silhouette of this temple of neoclassical style looks more like the Maison Carrée in the city of Nîmes than a religious building. The Magdalene Church stands on the right bank of the Seine facing the National Assembly on the other side of the river.

Its history is troubled: the first stone was laid by Louis XV in 1763. During the Revolution it almost became a stock exchange. Then, Napoleon envisioned to convert the building in a temple in honor of the Great Army’s glory. He changed his mind in 1812. The church was finally inaugurated on July 24, 1842 under the July Monarchy.

This elegant church hosted numerous celebrations for the rich and famous. Some great names of the aristocracy got married there. Masses for the funerals of Chopin, Coco Chanel and more recently Johnny Halliday were celebrated at the Madeleine.

Professor François Pupil, former professor of Art History at the University of Nancy and author of numerous books including one on the Madeleine, guided us throughout the rich interior decor, which includes a painting made by Jules Claude Ziegler in 1837. Some of the most famous sculptors of the time (around fifty different artists) left their mark in the Madeleine.

The church offers an anthology of romantic sculpture which includes “The delight of Mary Magdalene” by Carlo Marochetti which surmounts the high altar. We also find Henri de Triqueti’s imposing bronze doors, half of which were inspired by Ghiberti’s doors in Florence’s Baptistery.

Then Father Brien McCarthy, vicar of the Madeleine, talked about the social and humanitarian role of this church in this parish.

The Ozanam organization which meets the needs of the most precarious and also offers them computer training.

The Foyer perpetuates a very old tradition of hospitality initiated by Empress Eugenie. It offers meals for a few euros.

Isabelle de La Roullière, responsible for "Avenir Patrimoine", spoke to us about the Church attracting the talent of contemporary artists. This year’s Christmas crèche illustrates this tradition.

Léon-Paul Fargue (1876-1947), forever the poet of Paris streets Walks on the heights of Paris, an unusual breath of the countryside!