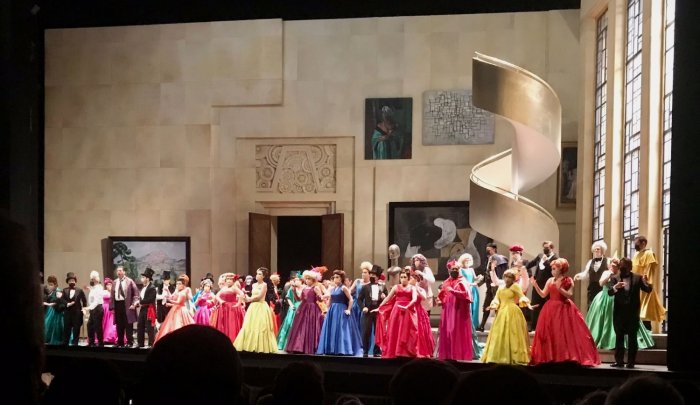 A newly liberated and emancipated woman who served as a model for heroines such as Carmen, La Traviata or the Lady of the Camellias.

Jules Massenet, a French composer (1842-1912) was inspired by the novel by Abbé Prévost entiled "The story of the Chevalier des Grieux and Manon Lescaut", which had a great impact when it was first published in 1761. There was no adaptation of the novel before Massenet composed this mastepiece which was first presented at the Opéra Comique, 150 years later. This turned out to be an immediate success.

The spectacular adaptation by Vincent Huguet at the Opera Bastille presents two lovers in the 1930s, a period somewhat similar to the 18th century with social divide between conservatism and the desire for freedom.

To our delight, the Director creates splendid sets for these sumptuous salon scenes where the opera invites the opera, where we dance with Josephine Baker or dizzying gavottes and minuets and where the game dominates. Laughter and songs give pride to the talented Choir of the Paris Opera. By contrast, the spectator also witnesses scenes of doubt and despair displayed by the Chevalier des Grieux. These scenes are cold, gray, without decor, except for a large and high grey wall, a reflection of their torments and of Manon’s dreams which were shattered by society’s rigor.

In the end, there remains an impression of lightness and modernity thanks to the nature this opera very close to being a comic opera with its tragic and comic characters, the alternation between spoken and sung dialogues, recitatives and tunes. This masterpiece comes close to being a musical play.

After facing Covid-related re-programming, this sumptuous "Manon" was very well received. The public was also rewarded by the presence in the title role of the famous tenor, Roberto Alagna, whose performance took place only on that date.

The hotel of the Tour d’Auvergne Did you know ?