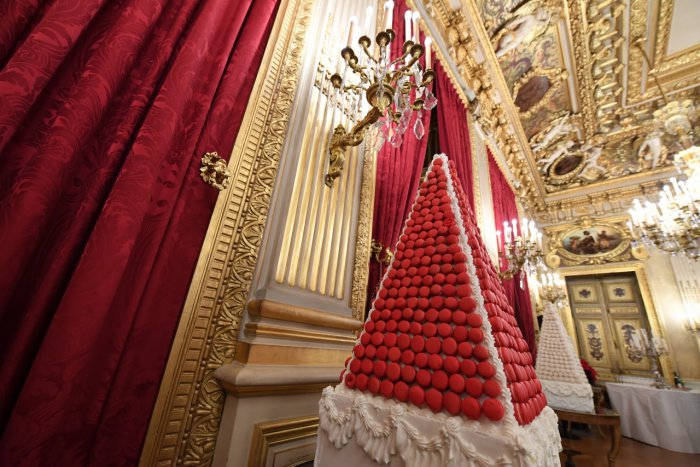 Bienvenue en France, at the edge of forty years

There were sixty chefs preparing the food in the vast kitchens of the Quai d’Orsay, and twenty-four circling the reception rooms, looking after us beautifully. The evening’s dégustation was centred around buffets from the French regions, which captivated the ambassadors and diplomats invited by Bienvenue en France with the richness and diversity of their produce. The students of the Paris-based Ferrandi cooking school once again marked their attendance under the watchful eye of their first-year teacher, Monsieur Houe.

The Minister, Monsieur Le Drian, was delighted to welcome his guests, making reference to “traditional French hospitality”. He went on to declare: “We hope to encourage you all to love a France that is passionate and committed to its values; to discover, with the help of the brilliant team at Bienvenue, the history of France through Paris’ many beauties as well as numerous treasures from the regions.” We were in need of sustenance after tasting all the Salon Delamotte and Charles Heidsick champagne we were offered upon arrival. Of course, this being France, viticultural temptation awaited round every corner. We might mention, among many others, the « Le grand palais » cocktail, a mixture of Benedictine and calvados from Normandy, which was served next to camembert samosas and pancakes stuffed with andouille de Vire. Not far away, the Centre-Val de Loire region sparked intrigue with their leek and bacon rissoles. Meanwhile, the Nouvelle-Aquitaine and Alsace regions were in competition over their foie gras, and the battle of the oysters waged on between Arcachon Bay (Nouvelle-Aquitaine), Quiberon (Brittany) and the Occitanie region. Brittany ruled the desserts with their crêpes and “cooki-zh”, not to be confused with the common cookie, although Alsace wasn’t far behind with its intensely spiced Christmas macaroons. As for the Bourgogne Franche-Comté region, they had opted for a cubist arrangement of their best cheeses, Le Morbier and Comté among others, which attracted photographers and guests alike. Corsica also made its mark with its charcuterie as fine as any caviar and its Brousse cannelloni. And finally, a special mention must also go to Sausin, experts in historical cuisine. Their orange-infused cauliflower cream dusted with cocoa power had a real story to tell. The dish dates from the time when Charles V offered François I the first cocoa bean to arrive in Europe from Guatemala. In her speech, our President Amanda Gourdault-Montagne chose to paraphrase Pablo Neruda in repeating “a single word, well-worn but bright like an old coin: thanks. Thanks to our founder Madame Marie-Thérèse François-Poncet, on the eve of Bienvenue’s 40th anniversary; thanks to Madame Marie-Reine Fischer, president of “Destinations Régions”; thanks to all the volunteers, since a President is nothing without her team, and none of this would have been possible without my Vice-President Véronique Debieuvre, the staff at the Beinvenue office and my two assistants. Thanks also to the Quai d’Orsay chefs. Many thanks to you all. And may Bienvenue continue to promote successfully the diversity and art de vivre which are the pride of France.” The Republican Guard band then themselves opted for an international set list, abandoning their battle marches in favour of a series of jazz tunes in what was surely their own way of honouring our peace-loving fellow diplomats.

The Hotel Montesquiou : Chinese Ambassador’s Residence The Island of Slaves by Marivaux