Vasarely or Art in movement 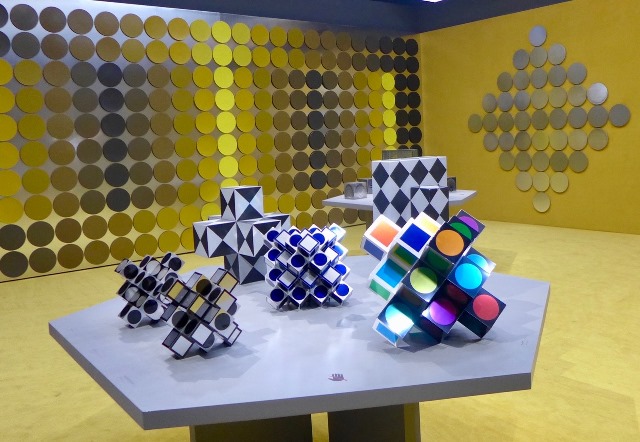 A square pivoting on an axis becomes a diamond, illustrating the visual principle at the centre of the artist’s research into kinetics!

The Centre Pompidou is currently hosting a major retrospective devoted to Victor Vasarely, with three hundred works on display. It was the perfect opportunity for us to learn more about the artist, known as the father of optical-kinetic art, who revolutionised geometric abstraction.

Between his early graphic period in the 1930s and the “cosmic dreams” that defined the end of his career, Vasarely explored all aspects and forms of kinetic art.

His works are in perpetual movement, a concept that the artist himself defined as: “The form, once caught by the eye, immediately changes into another form, never stabilising.”

Even so, we noticed an admirable coherence in the evolution of his work from the 1930 “Zèbres” series to the “radiant cosmos” characteristic of his later pieces.

We should have loved to have stayed longer at the exhibition, but we left marked by this colourful art in constant motion, so striking that it will stay with us for a long time to come.

By Nicole Pradon – From modern to contemporary art

The Mobilier national Aéroports de Paris, a showcase of savoir-faire in aeronautical logistics