Under the bridges of Paris 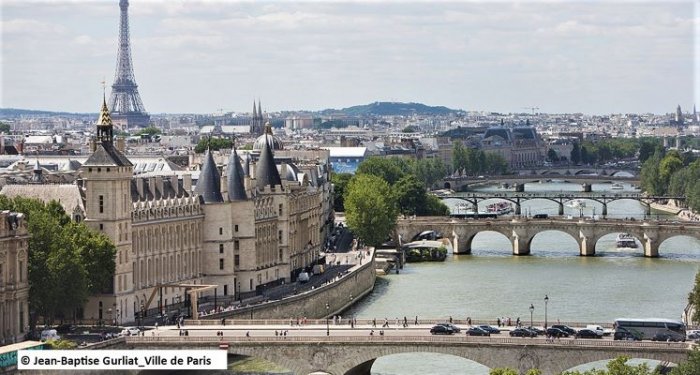 To start our walk we met up at Port de l’Arsenal which, located between Quai de la Rapée and Place de la Bastille, connects Canal Saint Martin and the river Seine. Once a commercial port, it became a marina in 1983 and now has a charming park running parallel, which we walked through to reach the lock.

Did you know that the bridges of Paris, now purely used as crossings, were built up with shops and houses in Medieval times? A number of footbridges were also built, like those over Canal Saint-Martin, Canal de L’Ourq and Parc de la Villette, so that pedestrians could cross the city’s waterways. In the distance, we could make out Pont de la Tournelle and its statue of Geneviève, the patron saint of Paris. Created by the famous sculptor Paul Landowski, the saint appears to be turning her back on the Notre-Dame – a violation of the artist’s wishes so severe that he refused to attend the inauguration in 1928. Our walk then took us to the romantic Pont des Arts, a link between Institut de France and the Louvre since 1804. Where better than this famous bridge in the capital of love for thousands of lovebirds to affix padlocks to seal their affection? But, in 2015, it all became too much and the traditional metal grilles, heavy with “love locks”, were replaced with transparent panels. We could make out the far off statue of Henri IV on the Pont Neuf which, despite is name, is the oldest standing bridge in Paris, dating from the end of the 16th century. The entirely stone structure across the Seine was famously “wrapped” by artistic duo Christo and Jeanne Claude in 1975. The public could walk on top of the work which, along with others by the artists, currently features in an exhibit at the Centre Pompidou. Paris’ third oldest standing bridge, Pont Royal, was commissioned by Louis XIII in 1685. The King had witnessed a ferry accident at the site and, as a result, decided to build a bridge there, which would eventually be made famous by the painter Camille Pissarro. Last but not least we came to Le pont de La Concorde, built in the midst of the unrest of the French Revolution. This is where we rounded up our excursion. Some of the group headed to Rue Sainte-Anne to have lunch at a Japanese restaurant, while others had planned a sunny picnic along the Seine. Meanwhile, the rest crossed the Jardin des Tuileries to visit the Musée de l’Orangerie and its exhibition of paintings by Giorgio de Chirico. Next time we will take a wander from Pont Mirabeau to Pont Alexandre III. We also hope to take you on the charming walk from Bastille to Bois de Vincennes, stopping to enjoy moules frites at Porte Dorée. But that’ll wait until spring!

By Anne Guillemin – Walk suggested by The Executive Board