Truth and myth on the Île Saint-Louis! 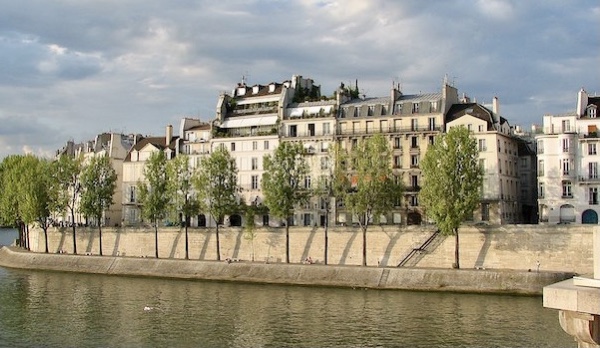 A spot of island hopping provides an opportunity to meet Baudelaire, Théophile Gautier…and experience some gusty and changeable weather!

Constructed between 1620 and 1670, the Île Saint-Louis was designed to seem like natural extension of the Marais, which in the early 17th century was Paris’ most desirable neighbourhood. The island’s uniquely picturesque quality is a result of its remarkably homogenous architecture.

Louis and François le Vau built almost every one of the island’s grand mansions. However, the narrow plot dimensions meant that they were unable to reproduce the layout that had become so fashionable in the Marais. Only the most distinguished houses, such as the Hôtel Lambert, could accommodate the “entre cour et jardin” design, with the main house being situated between a cour d’honneur (entrance court) and a garden behind.

The more modest homes were built along the river banks – with more secretive and austere buildings lining the north side, and more open and sunlit houses occupying the south.

At the “stern” and “bow” of the boat-shaped island are “figureheads” representing Hercules’ battle with the centaur, perhaps in recognition of the heroic efforts of the island’s builders, who had to work amidst the Seine’s strong currents and frequent floods.

Memories of the island’s famous inhabitants hang in the air at every turn: from the handsome Duc de Lauzun to the melancholy Charles Baudelaire; ostentatious Baron de Rédé and learned President Georges Pompidou; pouty Brigitte Bardot and femme fatale Michèle Morgan; even Helena Rubenstein, the “empress of cosmetics”, as Jean Cocteau called her.

A visit to the magnificent Church of Saint-Louis-en-l’île at the centre of the island provides the perfect end to our tour. This baroque church is dedicated to Saint Louis, Louis IX (1214-1270), and is topped by a curious clock tower, whose narrow openwork structure was designed to reduce the risk of damage caused by the gusts of wind which – as we found out – are particularly strong in this part of the city.

The Louvre: From royal fortress to cultural stronghold From modern-day street art to the Middle Ages of Charles V under the arches of the Palais Royal