The hotel of the Tour d’Auvergne 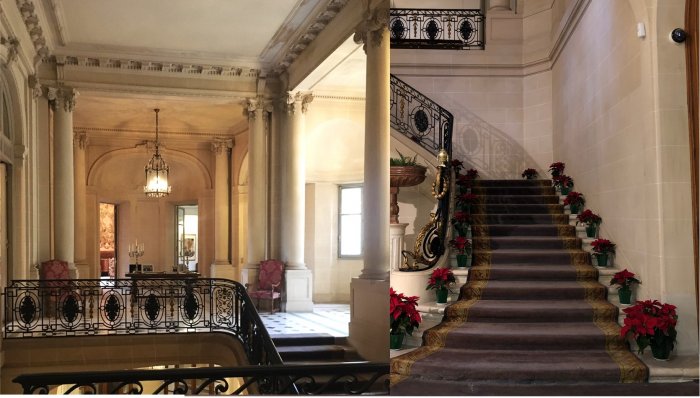 The Hotel de la Tour d’Auvergne has been, in recent years, a welcoming and prestigious site offering exceptional activities and events for Bienvenue en France thanks to the hospitality of Ambassador Juan Salazar Sparks and his wife, our friend, Karen. These activities included an 18th century French fashion show, rehearsals for our choir as well as visits of the palace itself.

This private mansion is indeed a jewel of our heritage. It was built at the beginning of the 20th century by one of the most prestigious architects of the time, René Sergent, for the Prince of la Tour d’Auvergne and his wife Elisabeth Berthier de Wagram. After the death of the prince, the palace became the seat of the United States Embassy at the end of the first World War and then, in 1929, it was bought by the government of Chile.

Located at the corner of two wide avenues, it offers an elegant, curved facade decorated with Louis XVI-inspired garlands of flowers. The virtuosity of the architect is expressed at the entrance by a majestic staircase of honor overlooked by a colonnaded loggia decorated with an astonishing set of mirrors from one room to another. Along the lounges we discover an elegant reception room decorated with Chinese style panels which were popular in the 18th century. We also can admire a library and opposite a dining room with ornaments coming come from the famous Hôtel Crillon. We can also admire many 19th century statues created by Chilean artists such as Nicanor Plaza whose art was influenced by the School of French artists. We also can admire large totems created by Antonio Paillafil, a Mapuche native artist. These artistic pieces take us on a journey of beauty where Chile and France meet.

Empanadas, a Chilean specialty and delicious Chilean wine were served as well as la “Galette des Rois” to complete our visit.

Did you know ? Cartier and the arts of Islam