The Louvre: From royal fortress to cultural stronghold 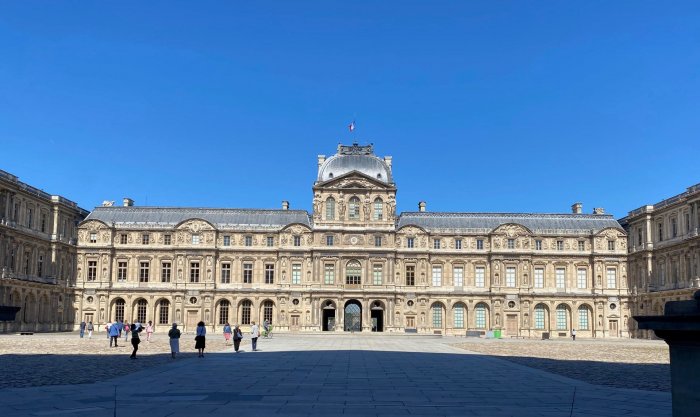 Once a medieval castle, then a royal palace, and now a museum – how has the transformation of the Louvre been achieved over the centuries?

The Louvre’s history begins with the kings of France. At the end of the 12th century, Philippe II built a keep and square castle, the foundations of which lie beneath today’s Cour Carrée. Later, Charles V transformed the castle into a more comfortable residence. But upon his return from Italy, François I tore down the medieval keep to make room for a palace designed by Pierre Lescot and Jean Goujon in the Italian Renaissance style. Their work can still be admired today in the Cour Carrée.

Next, Catherine de’ Medici, Henry II’s widow, built the Tuileries Palace in the middle of the former gardens. This was later connected to the Louvre by an elevated walkway along the left bank of the Seine – today’s Grande Galerie. Louis XIII lengthened Pierre Lescot’s façade with the addition of the Pavillon de l’Horloge, and Louis XIV completed this extension by putting the finishing touches to the Cour Carrée: the majestic Colonnade and interiors such as Le Brun’s Galerie d’Apollon. Then in 1682, Louis XIV abandoned the Louvre to set up court at Versailles. Over the years the buildings gradually became home to a community of artists and artisans.

It was fitting, therefore, that after the French Revolution, the Louvre was turned into a museum. During the Napoleonic era, the Louvre became the Musée Napoléon and the Cour Carrée was finally finished. Napoleon III then made the last additions to the Palace, in the form of two new wings on either side of the Grande Cour. By the end of the 20th century, the 1988 addition of architect I M Pei’s steel and glass pyramid had modernised the entrance to the buildings, and the entire complex had been renovated to become the world-famous museum that we know today. Once the site of monarchical, then imperial power, these days the Louvre is a symbol of cultural might, displaying a vast collection of the world’s most precious works of art.

"O Canada!" Truth and myth on the Île Saint-Louis!