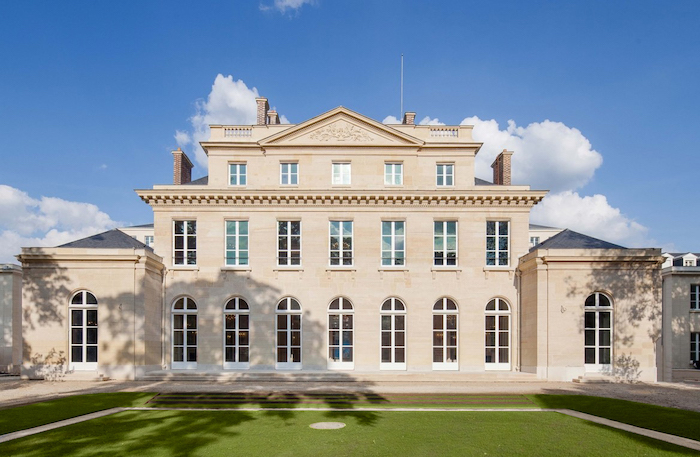 A symbol of the friendship and cultural dialogue between France and China.

Bienvenue en France enjoyed a delightful morning when we were welcomed in splendour to the Hotel to Montesquiou, recently restored by the Chinese state to its former glory.

The house was built in 1778 for the Marquis Anne-Pierre de Montesquiou-Fezensac, a descendent of d’Artagnan. Designed by the architect Brongniart, renowned for his final building, the Palais de la Bourse, it has been the property of the Chinese state since 2010 and the site of the Chinese Embassy since 2016.

The renovation was entrusted to French architect Laurent Bourgois, whose assistant designer Valérie Fougeras was present to guide us through the transformation. Mrs Wang Xinxia, wife of the Ambassador, paid tribute to their work, “we wanted French businesses and artisans to work on the building in order to ensure that the eighteenth-century neoclassical style was perfectly respected. Today, the house has regained its former splendour, becoming a symbol of the friendship and cultural dialogue between our two countries.”

Every inch of the building had to be renovated, except the glorious triple-tiered staircase in the entrance hall. The long reception room that opens out onto the garden is dazzling, with mirrors, gold leaf wall and ceiling decoration, and Corinthian columns punctuating the space.

“This room was designed for large receptions and was constructed upon the request of the Chinese authorities from three adjoining rooms,” Mrs Fougeras pointed out, “it was the only change to the building’s original structure.”

The other rooms feature a sympathetic blend of period furniture and objects from France and China. In the Ambassador’s office, Waterfall at Jingpo Lake, a Chinese ink wash scroll by the celebrated painter Fu Baoshi, hangs opposite a vast Louis XIV desk. “We had to be very careful about the choice of furniture and objects,” continued the designer, “the eighteenth-century pieces could be quite shocking to Chinese sensibilities. Many found to be very distasteful, for example, the monkey motifs that were so appreciated during the period.”

The tour ended in the music room, where Mrs Wang had organised a concert in honour of her guests. The programme included a duet between a pianist and a 21-string Chinese zither player, once again illustrating the harmony between the Chinese and the European arts. For the finale, Chinese Peking Opera prima donna Mrs Li Ping, winner of the Plum Blossom Prize, the highest national distinction, gave a song and dance performance from the popular masterpiece, The Drunken Concubine. We were soon feeling a little light-headed ourselves from the exquisiteness of the luncheon that was perfectly Chinese – except for the desserts, which were French of course.

Amanda Gourdault-Montagne, Bienvenue en France’s President, brought the morning to a close by thanking Mrs Wang for the “exceptionally generous, typically Chinese welcome” which she had extended to Bienvenue members: “You have restored our cultural heritage admirably whilst combining it with your own. It is no surprise to see that a blend of our two great cultures has produced such elegance.”

Yo Picasso" – a genius in blue and rose? Welcome fellow diplomats