The Basilica of Saint-Denis and the Kings of France 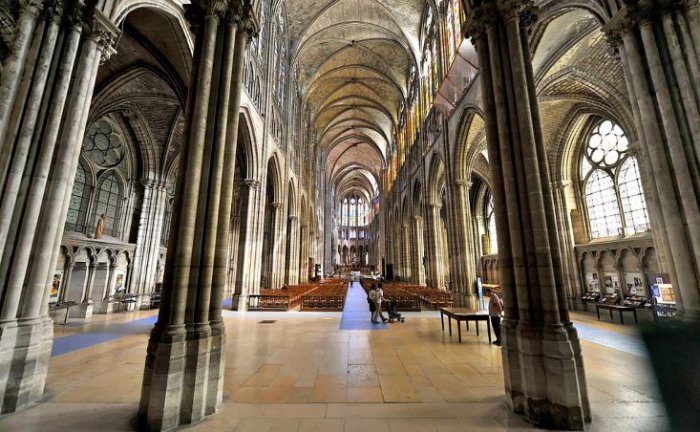 A masterpiece of Gothic architecture and the final resting place of the kings and queens of France, the Basilica of Saint-Denis is a melting pot of centuries of the artistic, political and religious history of France.

A unique architectural landmark The church stands on the site of a Gallo-Roman cemetery, the burial place of Saint Denis, who was martyred around 250. In addition to the Carolingian crypt, all that is left of the building consecrated by Charlemagne in 775, the basilica preserves the memory of two buildings that marked turning points in the history of religious architecture: the apse built by Suger (abbot of Saint-Denis from 1122 to 1181), a demonstration of what came to be known as new Gothic art and a true celebration of light; and the part rebuilt under Saint Louis, including the exceptionally vast transept that was intended to house the royal tombs.

A royal necropolis A place of remembrance from the early Middle Ages, the Dionysian monastery came to be favoured by the monarchy, gradually asserting itself as the privileged tomb of the royal dynasties. The kings drew on the powers of the holy martyrs to acquire legitimacy and protection during their life and gain direct access to heaven. When the Capetians took the throne in 987, the role of Saint-Denis as a royal necropolis was confirmed and most of the monarchs of France were buried there until the 19th century. In total, 42 kings, 32 queens, 63 princes and princesses and 10 nobles of the kingdom rest in peace there. With over 70 recumbent effigies and monumental tombs still preserved today, the royal necropolis of the basilica is the most significant group of funerary sculptures in France and a special demonstration of the turbulence of history.

The royal abbey of Saint-Denis suffered heavily during the Hundred Years’ War, the Wars of Religion and above all the French Revolution. In 1793, revolutionaries attacked the symbols of the monarchy, looted the tombs and smashed the recumbent statues, but the basilica thankfully escaped total destruction. In 1806, Napoléon Bonaparte ordered the restoration of the building. Then Louis XVIII reinstated the abbey’s role as a necropolis. Restoration work continued throughout the 19th century and was led, in particular, by architects François Debret and Eugène Viollet-le-Duc, however the work was never completed. The north tower was poorly rebuilt and remains dismantled to this day; will its 86-metre high spire rise again? Last December, the French State approved the vast reconstruction project.

We were delighted to be given a lecture tour of the basilica by Catherine de Vaucourbeil.

By Laetitia de Villelume - France, History and its Institutions