The Arc de Triomphe, a Roman arch built on a star! 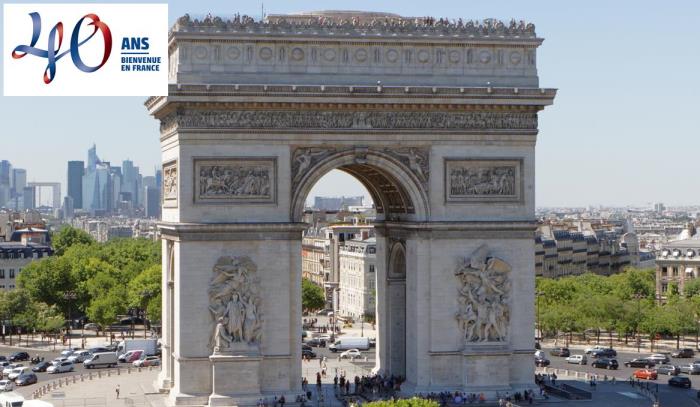 Sitting at the top of the Arc de Triomphe sipping on a glass of champagne in the middle of the morning was an unforgettable experience for the 40 Bienvenue members who were invited to celebrate the 40th anniversary of our organisation.

The morning started with a touching moment before the Tomb of the Unknown Soldier, as our guides recounted the history of a monument with which all the French political regimes are associated – from royalty, the Revolution, the two Empires and right through to the Republic today. And it all started with Napoleon. In 1660, Louis XV had the hill known at that time as the “Colline de Chaillot” partially razed to the ground as it blocked the road linking the Louvre to Versailles. The decision also meant extending the boundaries of Paris. He ordered the construction of a grand avenue extending from the Tuileries, now the Champs Elysées, on what was once marshy and uninhabitable land. In 1774, a plan was submitted for a 95-metre high triumphal elephant on top of the small hill, however the project was deemed too expensive by Louis XVI. During the Revolution, many a celebration took place atop the hill, but it still remained empty. When Napoleon I returned from Austerlitz, he wanted to build a triumphal arch near Bastille to comemorate the glory of his soldiers. However Champagny, the Minister of the Interior, convinced the emperor to build it on the hill at the future Place de L’Etoile instead and appoint Jean-François Chalgrin as architect. The decree for the construction of a triumphal arch was then signed in February 1806. In 1810 when Napoleon’s future wife, the archduchess Marie-Louise, arrived in Paris, she passed under a full-scale model of the Arc de Triomphe, complete with stucco and paintings. In 1814, the Arc de Triomphe was still only partially built when work was halted under the Restoration. Construction began again under the reign of Louis XVIII to recognise the glory of the soldiers of the royal army of the Pyrenees. Louis-Philippe I, King of France, decided to complete the monument and, in a spirit of reconciliation, make it a symbol for the heroic history of all French people. Four main sculptures stand out at the base of the Arc: the famous “La Marseillaise” by François Rude, “The Triumph of 1810” depicting Napoleon as a Roman emperor dressed in a toga, “Resistance” and “Peace” Napoleon III on the day of his coronation, Victor Hugo on his funeral bier watched over by 3 million people, General de Gaulle during the Liberation of Paris: all passed beneath the vaulted archway of the Arc de Triomphe. Not to mention every French President and official guests of France. We all knew something of the history of this monument, but coming together from far and wide for a moment of silence before the eternal flame was an experience that moved us all.