The Sorbonne, heart of student life 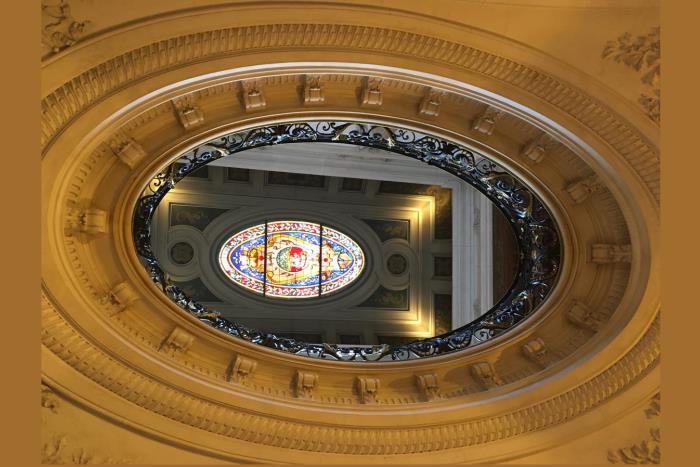 Time to go back to school!

We started with a visit of the Academic Palace of the Sorbonne located in the Latin Quarter, a hub of student life since the 13th century. Robert de Sorbon, the confessor and chaplain of King Louis IX, commonly known as Saint Louis, founded the College of Sorbonne, Faculty of Theology in 1257.

The greatest European masters taught and were educated there, cementing the college’s exceptional influence over the known world.

Since its beginnings, the college has contributed to philosophical and political debates swinging between conservatism and enlightened liberalism.

At the invitation of the Recteur – i.e. the Chancellor of the Académie de Paris (regional education area) - , we were welcomed by the Academic Delegate for European and International Relations who recounted the turbulent history of the Institution over the centuries. He graciously answered our numerous questions and gave us a tour of the private salons of the Rectorat of the Académie de Paris, usually only open to the public on European Heritage Days.

From the peristyle, a grandiose space for official meetings, we visited the Grand Amphitheatre inaugurated in 1888 with more than a thousand seats and decorated with a majestic painting by Puvis de Chavanne. We then went on to discover a series of richly adorned salons with immense paintings and sculptures representing symbols of knowledge and intelligence or historic events such as the creation of the Olympic Committee by Pierre de Coubertin in 1894 or when Louis Pasteur was officially honoured by the Sorbonne in 1892.

The vast painting by Puvis de Chavanne measuring 25.6 x 4.5m gave us a photo opportunity! We posed in a group or individually in front of a favourite figure from the famous “Sacred Wood” in which gracious nymph-like young women personify the institution’s major areas of study, including philosophy, history and the sciences.

Gripoix Paris: costume jewellery taken to the exquisite “Marie-Antoinette, metamorphoses of an image” at the Conciergerie