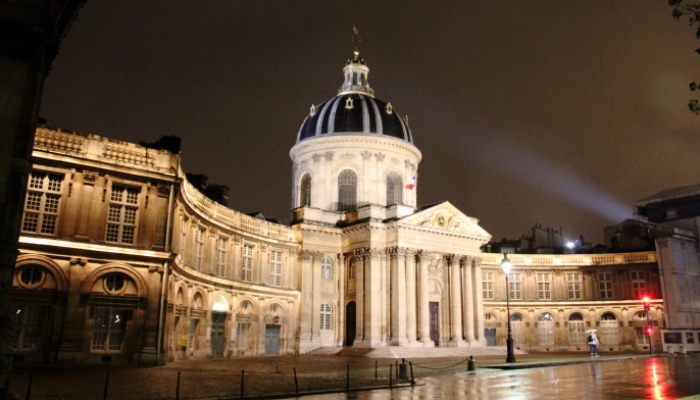 The "Parlement du monde savant" ("Parliament of learned society"), the Institut de France promotes recent advances in the arts and sciences in its quest for perfection and progress.

Sat in the chairs of the Immortels, under the world-famous dome designed by Louis XIV’s chief architect Louis Le Vau (1612-1670), our group of “Academicians for a day” took up every place at the illustrious table. There were 38 of us, the same number of people elected to the Académie Française.

Just two years after the royal academies were abolished in 1793, the Institut was established and tasked with gathering new findings as well as perfecting the arts and sciences. Minerva, the Roman goddess of wisdom, intelligence and reason, became the symbol of the learned society.

The Institut is accommodated in a stunningly unique, semi-circular building located on the left bank overlooking the Seine. Crowning the central chapel is the great dome, which Le Vau succeeded in creating circular on the outside and oval on the inside – a truly impressive architectural feat!

Our visit took us through some of the institution’s most private rooms, including the great salle des séances, a vast meeting hall reserved for each of the five academies one day a week, as well as the small room in which the Académie Française carries out its primary function of protecting the French language. In particular, this involves compiling and publishing a dictionary, the first edition of which appeared in 1694. The Académie is now working on the ninth edition of the dictionary, and is currently studying the letter “S”.

We then had the privilege of touring the Institut’s two libraries – the Mazarine Library, which boasts one of the most complete collections in France with 5,000 manuscripts and 500,000 books, 2,300 of which were printed before the start of the 16th century, followed by the library reserved only for the peer-elected members of the Institut, known as Academicians, and certain researchers.

Our one-off “meeting” under the dome did not involve the usual eloquent speeches, instead the floor was left open to our numerous questions that our guide answered with faultless expertise and in French, bien sûr!

The Louvre Abu Dhabi: An opportunity for cultural diplomacy Yo Picasso" – a genius in blue and rose?