Paris has a new cathedral ! 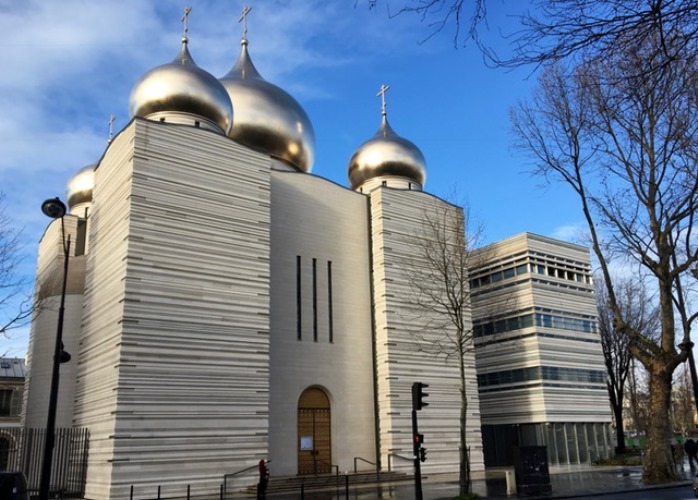 Topped with five onion domes covered in gold leaf, the Russian Orthodox Spiritual And Cultural Centre, which opened last autumn, is a symbol of the friendship the binds France and Russia.

Inaugurated in October 2016, the new Russian Orthodox Spiritual And Cultural Centre, situated on the banks of the River Seine with its silver onion domes reflecting the tones of the Parisian sky, is now an integral part of the French capital, as much as the neighbouring Eiffel Tower or the Pont Alexandre III, symbol of the friendship the binds France and Russia. Designed to promote Russian culture and language in France, it opens its doors to the public for concerts, film screenings, seminars and conferences. It also offers Russian language courses for children and adults within a subsidiary of the State Russian Language Institute, also known as the Pushkin Institute. The centre also comprises an orthodox cathedral belonging to the Diocese of Chersonese of the Moscow Patriarch, under the authority of Patriarch Kirill.

Seated in the cultural centre’s magnificent amphitheatre, we watched a series of videos that gave us an insight into what goes in to building a cathedral in today’s world. The construction, which would have taken several centuries in Medieval times, was completed in just two years. However, human hands are still required to add the finishing touches – such as the polished stone from Burgundy and the onion domes made of composite materials, 11m in diameter and gilded with 90,000 squares of gold leaf. The construction was built by Bouygues and designed by the architect Jean Michel Wilmotte.

Father Ioann Dmitrov greeted us in the great cathedral, where the white walls will ultimately be decorated with a multitude of frescoes. Precious antique icons can already be admired on the iconostasis. He spoke to us about the symbols that are important within the Russian Orthodox religion. For example, churches are always topped with five onion domes, which represent Christ in the centre surrounded by four evangelists. The upper part of the cross shows the title-board inscribed with “INRI” which Pontius Pilate ordered to be hung in mockery over Christ’s head on the Cross. And the slanted bar on the lower part of the cross, remembering the “balance-beam of righteousness”, represents Good pointing upwards to the right, and the concept of sin pointing downwards.

After our tour of the exhibition on Leonid Ouspensky, a famous Russian icon painter of the 20th century, we were invited by Mrs Galina Mechkova, wife of HE the Ambassador for the Russian Federation, to taste a delicious selection of pirozhkis, sweet and savoury nibbles and cakes.

Because the art of cooking is also an important aspect of culture.