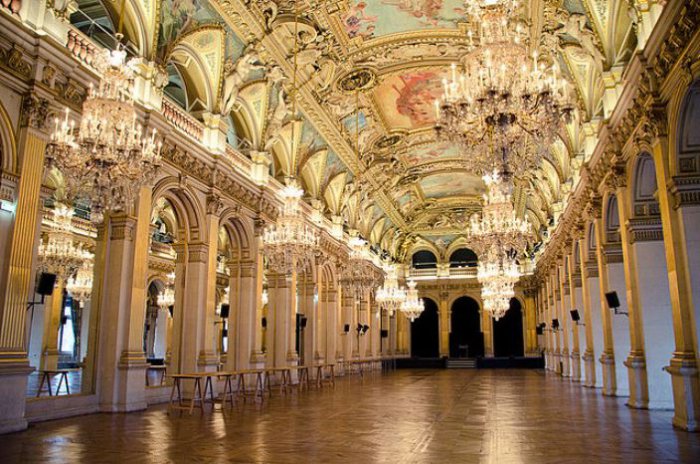 Seat of local institutions, the Parisian Town Hall houses no less than 163 members of the City Council. Renowned for its troubled history we discovered some of its almost unknown halls.

The France and French Institutions group was received at Paris’ Hotel de Ville by Madame Séverine Rousseau. Her extensive knowledge of the institution opened our eyes to the establishment’s organisation, role and operations.

We were given the privilege of being allowed to take a seat in the chamber, where the city councillors usually sit.

The iconic Hotel de Ville, the central office for the city council, has been at the centre of a great many significant events in the history of France.

The Paris Council is currently made up of 163 members, who are elected every six years across the capital’s 20 districts. The councillors themselves then nominate the Mayor of Paris. Every month, the Council debates topics put forward by the Mayor that have already been considered and discussed within one of the various specialised commissions.

Following the 1871 fire during the Paris Commune, the exceptionally talented architects Théodore Ballu and Edouard Deperthes succeeded in creating harmonious unity from a remarkable and sometimes surprising combination of the neo-renaissance style of the main façade and the various styles of painting of the interior. We were able to visit parts of the building that are normally closed to the public, such as the Assembly Room and a stunning gallery of stained glass windows displaying the names, titles and coats of arms of the various “Provosts of the Merchants” that presided in the institution.

It is in these sumptuous surroundings, and in particular in the Salle des Fêtes and the Grand staircase, that heads of state and other important world figures are received.

A museum in a station, the most beautiful collections of art in Orsay Napoleon, the strategist