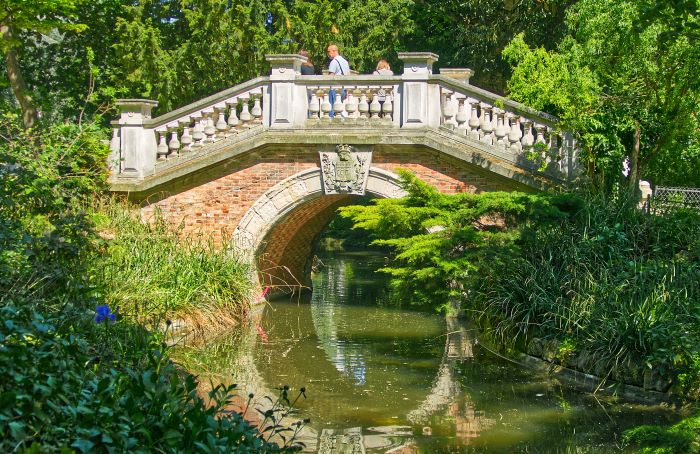 Parc Monceau was originally a 20 hectare park created for Philippe d’Orléans, Duke of Chartres. In 1773, the landscape gardener Louis de Carmontelle was tasked with transforming the park into an Anglo Chinese garden, rich in fantastical features.

Carmontelle aimed to “put together into one garden all times and all places”, which is why the park featured a number of architectural follies such as the ruins of a Medieval church, a Dutch windmill, the vestiges of an ancient Greek temple, an Egyptian pyramid and multiple grottos and waterfalls. But the most evocative of these structures is the Rotonde des Valois, a series of majestic Corinthian pillars overlooking a pond, reminiscent of the Canopus at Hadrian’s Villa in Tivoli, Italy. The pillars were originally built in Saint Denis at the behest of Catherine de’ Medici upon the death of her husband, Henry II of France, to provide a burial place for the Valois family. In 1783, a corporation of financiers known as the Ferme Générale decided to build a wall around Paris so that they could charge a toll on any goods brought into the city. At the edge of Parc Monceau, a temple like rotunda called the Pavillon de Chartres was built. While the ground floor was used as a customs house by the Ferme Générale, the Duke of Chartres used the first floor to host parties. After the Revolution, the park opened to the public. It was here that spectators watched André-Jacques Garnerin carry out the first ever successful parachute jump in 1797. During the Second Empire the Pereire brothers, a pair of French entrepreneurs, split up and sold off the land making up half of the park. Wealthy bourgeois banking and industrialist families such as the Camondos, Rothschilds and Cernuschis were deemed too “nouveau riche’ to establish themselves in the aristocratic Faubourg Saint Germain district and thus bought up these lots to build their luxurious townhouses. One of those families was the Meniers who, in just four generations, went from making cacao coated medicinal pills to chocolate. This shift was overseen by the founder’s son Émile-Justin, nicknamed the “Cocoa Baron”, who was awarded a gold medal at the Paris World Fair in 1855. The Meniers built their first chocolate factory in Noisiel near Paris. The spectacular complex is now home to the French headquarters of Nestlé. Leaving Parc Monceau along Avenue Ruysdaël, we came across Gaston Menier’s former residence — a town house of an eclectic yet luxurious design, which now houses the national association of French pharmacists. By now, all this talk of chocolate had made some of us hungry, and we were delighted when Véronique produced a Menier chocolate bar, which was immortalised in a number of selfies. A richly deserved homage to the Menier family, who created the first chocolate bar in 1836.