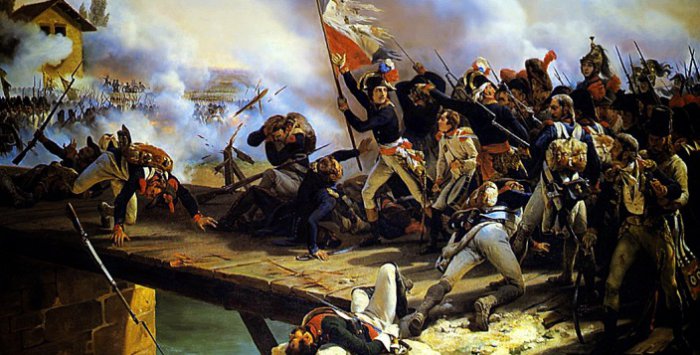 With such tactical and political genius victory seems endless for Napoleon: Marengo, Austerlitz, Iéna, Wagram....he leads his men, flag flying, under fire. The exhibition displays the art of waging war.

Until 22 July, the Musée de l’Armée is exploring the origins of Napoleon’s political and military genius through its exhibition Napoleon the Strategist. The History of France group had the opportunity to be taken on a guided tour by the exhibition’s curator and Chief Heritage Conservation Officer, Emilie Robbe.

«The aim is to shine a light on the tricks of the trade, the ways in which Napoleon created the conditions for victory, on the battle field as well as in the political arena», she explained by way of introduction.

The exhibition starts by looking into Bonaparte’s training and early military career prior to the siege of Toulon in 1793. It was here that as a young captain he criticised the way the siege was being conducted and proposed a different plan which led to victory. But definitive proof of his tactical genius came during the Italian campaign. Leading from the front line, and so earning the respect of his men, he staked everything on a strategy of concentrated forces and rapid execution. During the battle for Arcole bridge in November 1796, he bore the flag as he led his men through a hail of bullets. Coming under intense fire from the Austrians, he ended up in a muddy swamp. But this act of bravery had a powerful impact on morale, as demonstrated by Gros’ Bonaparte at the Pont d’Arcole (1896), the opening scene of a fabricated legend. In 1799, the coup of 18 Brumaire propelled Bonaparte to Head of State. There he applied his military strategy to the political sphere, manifesting a refusal to surrender and provoking confrontation just at the crucial moment. This same bold, daring impulse led him to victory after victory: Marengo, Ulm, Austerlitz, Iéna, Friedland and Wagram. However, despite his invincibility, it was nonetheless on the battlefield that he lost the Empire he had established. Incapable of delegating and at the head of a vast Empire, Napoleon lost his resolution and didn’t adapt his strategy when faced with an enemy who, for its part, had learnt from its mistakes. War was no longer fought in pitched battles, it was guerrilla-style in Spain, scorched earth in Russia.

Throughout the visit, multimedia displays invite visitors to put themselves in Napoleon or his adversaries’ position both in victory and in defeat.

At the end of this thrilling tour, Isabelle de Laguiche told us about the major political developments that took place between 1945 and 1969, namely decolonisation, building the European project and Charles de Gaulle’s presidency. What better way to finish the year than with this action-packed morning?