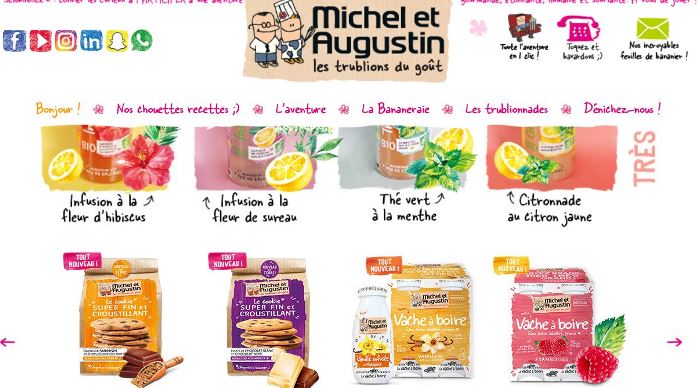 A recipe for success! We all know and love the quirky and playful packaging and advertising that make Michel et Augustin stand out from any ordinary biscuit on the shelf.

We were invited to the head office of Michel et Augustin in Boulogne to learn about the recipe for success baked up by this young French brand producing deliciously indulgent cookies and desserts. At the start of this journey, it was just two friends who met in their early teens and both went on to graduate from a well-known business school in Paris. Michel is the calm one with an eye for numbers while Augustin is more a jack of all trades with a creative streak. After a conventional start to their career, they decided in 2003 to work together to develop an authentic brand for natural food that only uses good quality ingredients and as few additives as possible. Their first creation was a humble shortbread. They wanted it to be perfect and spent much time testing more than 300 recipes in their kitchen. Only then did they feel ready to start their homemade production. They then approached independent retailers in their neighbourhood and one after another managed to convince them to sell their product. Their first major breakthrough came in 2004 when the supermarket chain Monoprix agreed to stock their shortbread, on the condition that they expanded their range. The Michel et Augustin brand now includes 70 products and generates €50 million in revenue. Their products are sold in all major supermarkets, petrol stations, aeroplanes, and on SNCF trains in France. Furthermore, the business is expanding all the time in international markets, and is currently present in 24 countries with a head office in New York! The team is very young, with an average age of 28. When hiring new people, the most important criteria is whether they’re nice (!), but the company is also looking for those who are creative, smart, ambitious, inquisitive and enjoy doing things well. Their communication is always a bit out there, humoristic, playful and they regularly organise challenges to give away their delicious products. In April 2019, to ensure the long-term success of the company, Michel et Augustin sold 95% of their capital to Danone but still remain at the helm of the company. With a range that includes shortbread, yoghurt drinks and savoury cheese biscuits, as well as a selection of gluten-free products and a few vegan choices (like the egg-free milk-free chocolate mousse), Michel et Augustin has something to please every palate.

By Isabelle Emié - Economy and Industry

The Sorbonne, heart of student life Degas at the Opera The stage, the dressing rooms, the lights, the audiences…. the dancers!