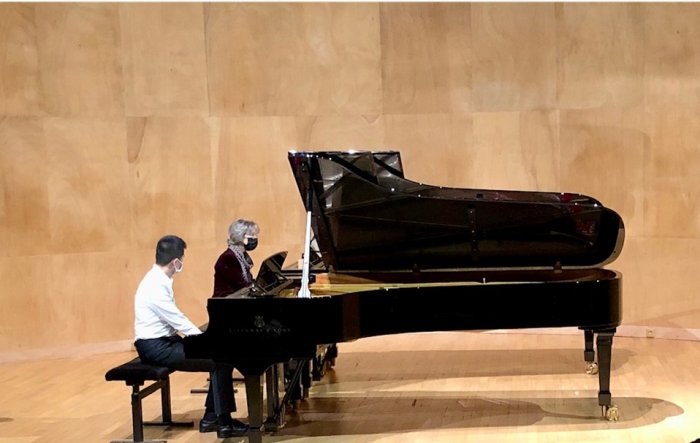 The mystery of musical interpretation: Anne Queffelec at the Salle Cortot

The Salle Cortot was built in 1929 by Architect Auguste Perret at the request of the pianist Alfred Cortot for the Ecole Normale de Musique in Paris, which he had founded ten years earlier.

Unlike most rooms which are built in depth, this one is designed in width and height. The architect was inspired by Greek amphitheaters. As a result, the acoustics are exceptional!

In this typically "Art Deco" universe we had the privilege of attending a MasterClass by pianist Anne Queffelec, who is undoubtedly amongst her generation’s most admired French pianists. Aside from foreign stages, she faithfully participates in the Festival de La Roque d ’Anthéron and the Folle Journée de Nantes, among others.

Her class was given to three young students coming from Turkey, Japan and Taiwan, all three already endowed with international competition prizes and who will undoubtedly be the virtuosos of tomorrow. Anne Queffelec’s discography is very rich, ranging from Bach to Dutilleux as well as Scarlatti, Haendel, Mozart, Schubert, Chopin and Liszt. She is also particularly attached early twentieth century’s French music including Satie, Ravel, Fauré and Debussy. The first part of her MasterClass which was devoted to Debussy (préludes then images) was most enlightening.

If assisting to a concert is a moment of grace, attending a masterclass is a distinct and exciting pleasure because it allows you to witness the development of an interpretation. Anne Queffelec was dazzling, especially in the second part of the class, in her teaching of Beethoven’s Opus 111.

Thanks to her high standards and enthusiasm, we were able to participate in the mystery of the work of a sound, pedal play, ... all

these imperceptible subtleties of sound, its nuances and breath which can make a final interpretation transport you into a world of beauty.

We have seen what a MasterClass is: regardless of students’ talent, the teachings provided by an internationally renowned artist allows music lovers to witness a passage from the beautiful to the very beautiful to the point of reaching the sublime.