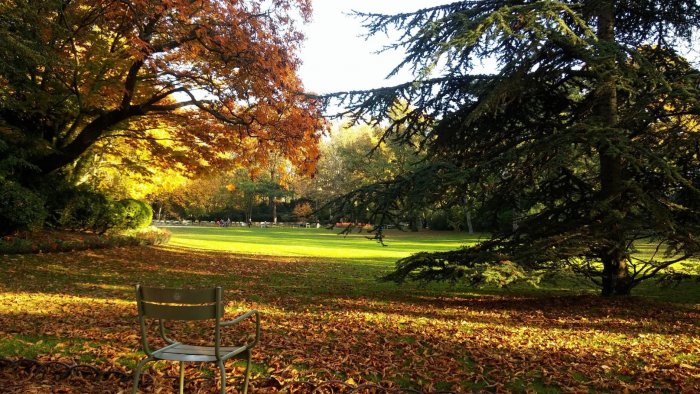 An iconic Parisian park at the heart of the Left Bank

In 1612, Marie de’ Medicis purchased a town house from the Duc of Luxembourg, where she promptly commissioned the creation and construction of a palace based on the Palazzo Pitti and its Boboli Gardens in Florence. Later used as a prison during the Revolution, the building now houses the French Senate. The garden spans 24 hectares, with its current design attributed to Haussmann.

In front of the Senate is a French style garden featuring beautiful flowerbeds and the famous pool, well known for the model boats visitors sail there. We explored the English style garden and discovered its wonderful trees – sequoias, Lebanon cedars and a few hundred year old chestnuts. The nearby Chartreux nursery garden is a conservatory orchard and home to 600 varieties of apple and pear trees, including 200 varieties for chartreuse. A little further on is the Orangerie, which currently houses 180 small trees – bitter orange, date palms, oleander and pomegranate – for the winter. The greenhouses, meanwhile, contain some of the world’s most beautiful orchids. The site’s thirty gardeners, recruited through a highly competitive examination process, maintain the gardens using traditional and environmentally friendly techniques.

People of all ages enjoy the Jardins du Luxembourg, with the littlest coming to watch the Puppet Theatre, Guignol, present since 1860. In 1933 members of the French Senate, recognising that they weren’t up to the task, entrusted staff members’ children to choose the best puppet show. That’s how Robert Desarthis was chosen – his son is still in charge of the puppet theatre today. Additional fun activities include a carousel, swings and pony rides. The gardens’ proximity to the Latin Quarter and Saint-Germain-des-Prés makes it a favourite spot for students to have picnics and enjoy an apéro. Players of chess, bowls and tennis cross paths with Parisians just looking to read quietly in the shade of the chestnut trees. Lastly, the demonstration apiary set up in 1856 trains its students in beekeeping. Every year, they harvest 400 kilos of honey.

The vast historic, botanical and cultural heritage of the Jardins du Luxembourg makes the park a unique gem in Paris.

Under the bridges of Paris The Exhibitionist – Christian Louboutin