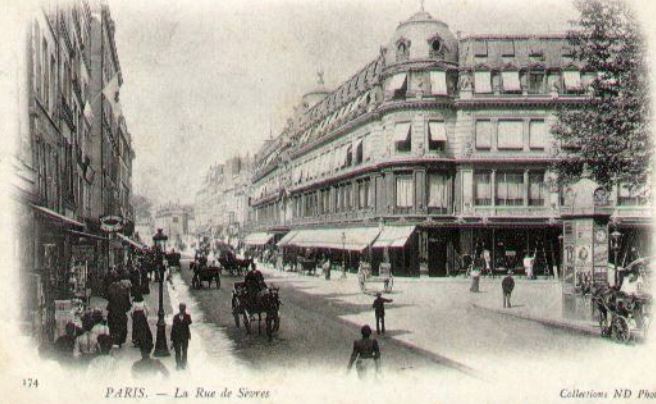 Le Bon Marché inspired Émile Zola to write, for every woman’s happiness. The client is king and the woman worshipped! True initiator of shopping as we know it Aristide Boucicaut created more than a department store, he proposed a paradise of fashion.

Aristide Boucicaut, a humble shop assistant from Normandy, went to Paris in 1828 and started working in a novelty store before he joined Paul Videau, who owned a store named « Au bon marché » on the corner of Rue du Bac. He later sold his share of the store to Boucicaut, who carried the venture on alone. Supported by his wife, Marguerite, Boucicaut shot up the social ladder, investing his entire fortune in the store as he begun to make the changes that would bring about a new trend in retailing, the department store.

Prices were shown on labels, margins were low, Boucicaut introduced the idea of a «money back guarantee » and created genuine stories with his displays. Simply put, Aristide Boucicaut did much more than merely sell consumer goods, he sold a desire to buy!

In 1869, architects Louis-Charles Boileau and Gustave Eiffel started to build a building using a revolutionary iron structure that filled Parisians with awe with its lavishly decorated large windows.

Aristide Boucicaut died suddenly in 1877, and his wife Marguerite ran the company for the next 10 years with help from her husband’s former colleagues.

The values that characterise le Bon Marché are :

THE CUSTOMER IS KING The customer base was made up mainly of women : Le Bon Marché created the first dresses for women and set up a lounge area for husbands to be able to relax while their wives did their shopping! The Boucicauts came up with innovative ideas, such as developing the mois du Blanc, the first mail order catalogue to promote Le Bon Marché throughout the whole of Europe... However, the most impressive creation was perhaps the Hotel Lutetia, inaugurated in 1910. Marguerite Boucicaut launched the project many years beforehand to enable her clients from the rest of France or abroad to enjoy good quality accommodation.

A PATERNAL MANAGEMENT STYLE inspired by Christian socialism With its 1,788 employees in 1877, Le Bon Marché helped to develop a new social class of employees. They enjoyed many advantages that were inspired by Christian socialism, such as a free refectory, a life insurance fund, a pension, one day of paid leave per week and... a mere 12 hour working day.

In 1984, Bernard Arnault’s LVMH Group bought the department store that then turned its focus exclusively to the luxury market.

The Lutetia is still the only luxury hotel on Paris’ left bank.