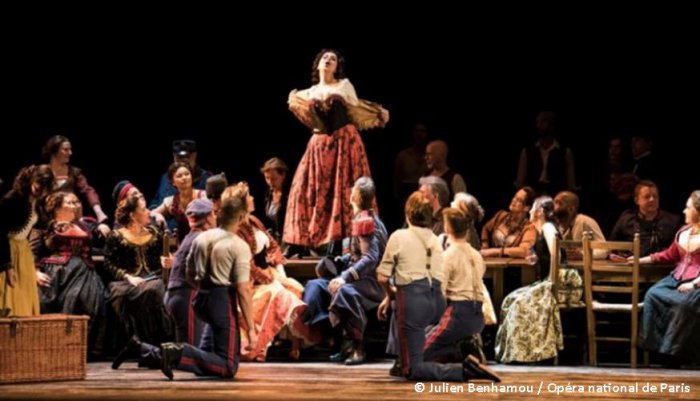 "Nothing can escape the power of fate"

This masterpiece of Verdi’s later years owes its fame largely to the opening scene. Even though its overarching theme appeals to collective memory, the work itself is not so popular, perhaps because of a somewhat dense plot with several overlapping storylines. Indeed, it is a grand lyrical fresco deeply rooted in its own time, full of twists and turns, that over four acts combines comedy, romantic tragedy, dramatic scenes and intimate episodes. We were all expecting to see this famous opening scene but the curtain rose on a very intimate setting: Don Alvaro is about to flee with Leonora so they can marry against her father’s wishes. Leonora is hesitant as she wants to see her father one last time, leading to the first blow of merciless fate. Her father catches the two lovers and he is killed by a gunshot fired accidentally! From that moment on we were caught up in the drama and the emotion. The captivating music of the opening kept the audience on the edge of their seats throughout all four acts. If the relentless blows dealt by fate who “laughs in the face of man” are the central theme of this dark and fatalistic work, the music is the frame as the orchestra subtly works the opening theme into each scene. The crystal-clear notes of a harp played with incredible finesse echoed the beautiful voice of soprano Anja Hartejos (Leonora). She admirably alternated between powerful high-pitched notes and soft delicate phrases creating poignant moments in her most famous airs such as “Vergine degli angeli”, a cry of “maledizione” let out at the top of her voice, or the final “Pace, pace..” that earned her a long standing ovation. At her side Brian Jagde (Don Alvaro), who is making his debut at the Paris Opera, impressed with the projection of his voice and the rich clarity of his timbre, showcased in particular in “O tu che in seno agli angeli”. This opera requires the strongest singers even in supporting roles, whether it be Padre Guardiano or the ever complaining and gossiping Fra Melitone. But it is the very sober staging that contributes to the unity of the general atmosphere and to this touch of very Verdian romanticism that shifts from pure mysticism, as in Acts I and III, to more varied scenes that sometimes come close to light comic opera. Rather than emphasising location, the stage is set with only a few accessories and pieces of furniture, which when coupled with dramatic lighting creates a very pared back aesthetic. It was impossible not to be taken aback by the sight of an immense Christ on the cross suspended above our heads! There were also several nods to Verdi’s political engagement and the Risorgimento: the vivandière waving her flag that then transforms into the Italian flag and her drumming, and the graffiti spelling “V.E.R.D.I” (though at the time this meant Viva Victor-Emmanuel Re De Italia!) This extraordinary interpretation of La Forza del destino, a poignant and moving work, will stay with us for a long time to come and we each left the theatre with the feeling that indeed nothing can escape the power of fate.

By Héléna Rollet – Visits to the Opera

"O Canada!" A journey through the valley of the Rhône and Languedoc tasting some exquisite and surprising wines.