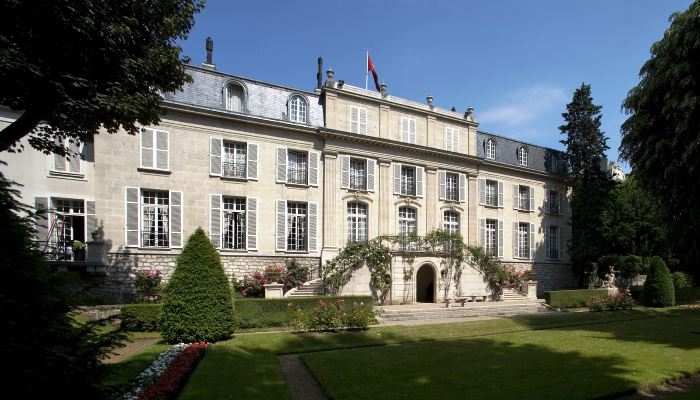 Eastern past and present in a historic Parisian mansion

Wife of His Excellency the Turkish ambassador and member of the Treasures of Parisian heritage group, Madame Tulay Musa wanted to introduce us to the ambassadorial residence at the Hôtel de Lamballe, also welcoming diplomats from the Turkish delegation to UNESCO and the OECD, as well as her female ambassador friends. Madame Le Drian honoured us with a friendly visit, as did our BEF President and Vice President.

Located in what was considered the Passy countryside until the 19th century, the palace was the residence of members of the nobility under the Royal family, such as the Duc de Lauzun and later Madame de Lamballe, "le cher cœur" (“the dear heart”) of Queen Marie-Antoinette. In the 19th century, the house was taken over by Dr Blanche and turned into a famous “five star” psychiatric facility, to which people flocked from all over the world. Literary meetings and musical evenings with Charles Gounod on piano, brightened up everyday life at the clinic!

In the 20th century, the Comte de Limur, diplomat and pilot during the First World War, and his wife, the renowned American philanthropist Ethel Crocker, renovated the property with impeccable taste and meticulous respect for its heritage. They also donated to the city of Paris the Maison de Balzac. In 1946, on the initiative of a young Turkish diplomat Nevin Menemencioglu, the Republic of Turkey rented and then bought the residence.

The morning was also an occasion celebrate the many centuries of excellent diplomatic relations existing between France and Turkey, from when Suleiman the Magnificent responded to the call for help from François I – “our horse is saddled and our sabre girdled!” – to the visit from Sultan Abdulaziz 1867 invited by Napoleon III and to the founding of the lycée impérial francophone Galatasaray (‘Galatasaray Imperial French High School’) in 1868, where a significant number of the Turkish elite was educated until Mustafa Kemal Ataturk proclaimed the Republic in 1923. He brought his country into the modern era, giving women the right to vote in 1934, even before France!

This wonderful morning ended in a sumptuous and delicious lunch of Turkish specialities, from imam bayaldi to Circassian chicken, not forgetting the exquisite desserts flavoured with rosewater and roasted pumpkin. It truly was a day to remember for the hundred or so diplomats present!