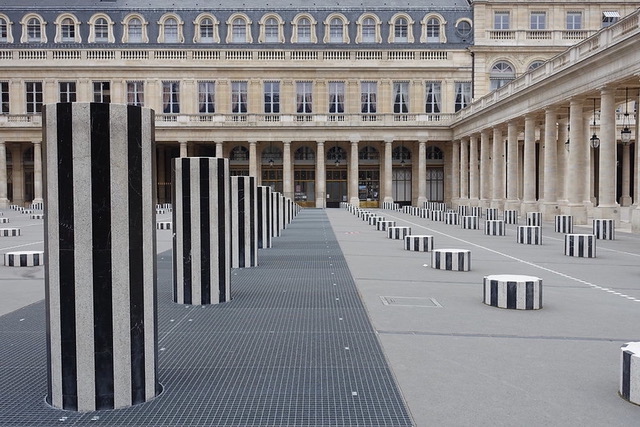 Once home to the young Louis XIV, this vast palace today houses some of the cornerstones of the French Republic, including the Conseil d état and the Conseil constitutionnel, as well as the French Ministry of Culture and the Comédie Française.

We were also delighted, albeit a little surprised, to spot some rather unconventional works of contemporary art here and there! Our journey through this vast domain was just full of surprises oscillating between tradition and modernity.

We met under the arches opposite the Kiosque des Noctambules, which was designed by Jean-Michel Othoniel in celebration of Hector Guimard’s elegant Art Nouveau entrances to the Métro subway system. A dream-like ode to love, it is composed of two crowns –symbolising day and night – threaded with 800 murano glass beads in seven different colours. From there, we headed off to the Palais Cardinal, built in the 1630s by the architect Jacques Lemercier for Cardinal de Richelieu. Originally used as a theatre for courtly entertainment, it was on the stage here that Molière collapsed in a fit of coughing just hours before his death. Today, it is home to the world-renowned Comédie Française. The main courtyard that stretches out underneath the windows of the Conseil d’état is famous for its black and white striped columns of different heights coming out the ground like sticks of seaside rock, created by Daniel Buren, which could be interpreted as an extension to the colonnades of architect Pierre Fontaine, while the Fontaine des Spheres sculpted by Pol Bury portrays a sensory experience where the mirror finish reflects the architecture in its surroundings. The monsters lurking in the Galerie des Proues celebrate the end of the Siege of La Rochelle (1628), which marked the height of the struggle between the Catholics and the Protestants in France. They form a bestiary of legendary creatures that leads to the twin sculptures commemorating the former French Minster for Culture André Malraux (1901-1976), produced by Michel Alberola, which reflect an intimate dialogue between the Smiling Angel of the Reims Cathedral and the Khmer art so dear to Malraux. Today, the Rue de Valois separates the Palais Royal from the former commons of the palace gardens. On the site where a church once stood, two buildings used by the Ministry of Culture were joined together by an interlaced steel structure designed by Francis Soler, who drew inspiration from Giulio Romano’s Sala dei Giganti at the Palazzo del Te in Mantua, Italy. A garden hides behind a palisade that boasts a stunning example of Street Art created by Villeglé, Lek and Sowat.

Turn 180°, and you can admire the stunning Contant d’Ivry pavilion, a Rococo masterpiece. This courtyard is also home to the impressive bronze sculpture by Ousmane Sow depicting two men wrestling one another, which stands directly on the ground. We wandered through the garden surrounded by exquisite architecture designed by Victor Louis, and were somewhat disappointed not to be able to sit down for a moment in Michel Goulet’s original take on the traditional chairs installed in Parisian gardens. Known as Les confidents (The Confidants), these ten pairs of chairs set facing one another each marked with a fragment of poetry bring to life the work of Hugo, Pasoloni, Rembrandt and Whitman, to name but a few. Along the way, we walk longingly past the famous Michelin star restaurant “Le Grand Véfour”. We emerged from the Passage des deux Pavillons and walked along by the talus remaining from the walls built at the time of Charles V. Our walk ended in front of the Notre Dame des Victoires, near to which stands the vestige of the old rampart walls.

Truth and myth on the Île Saint-Louis! Etiquette and the art of hosting à la française