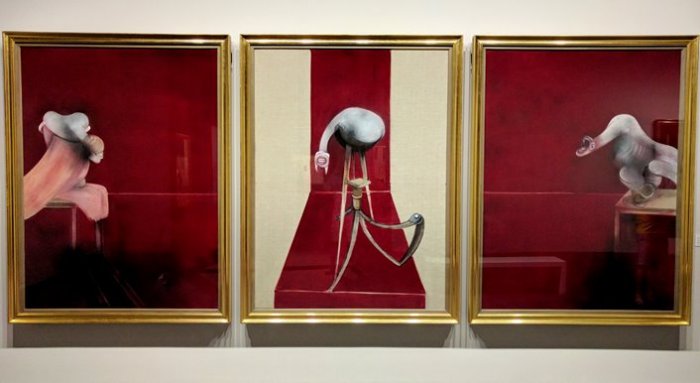 “I was a little crazy, it was the only way I could exist…”

His life was somewhat chaotic. Born to a Jewish father and a Christian mother, Bacon’s lived a bohemian life and had little formal education. He spent his adolescence in great isolation and later said: “I was lucky in my life as an artist to be born at the time of Conceptualism and Minimalism!”

He was inspired by two artists in particular, Warhol and Beuys. Warhol would say of his work, “I just do it, I don’t know how, it’s luck”, and Beuys prescribed a divine attitude.

The 1972 “Monumenta” exhibition of contemporary art at the Grand Palais greatly impressed and influenced Bacon and many other minimalist artists.

We were intrigued by one of the exhibits showing boxes filled with photos. Bacon explains the work, revealing that painting wasn’t enough to satisfy him so “[he] went in search of [his] childhood and [he] found it and put it in a box.”

Bacon’s real moments of creativity stem from the many breaks he took in his life as an artist.

We were both shocked and fascinated by his monstrous and tormented works, which encapsulate the power of his art and his talent as an artist.