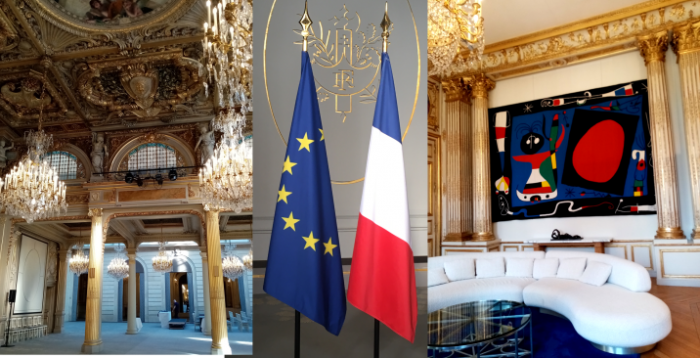 A history, a heritage, a place of work

After being greeted at the main entrance gate of the Élysée Palace, we make our way into the interior courtyard where we were allowed to walk on the gravel—an exclusive privilege for VIPs, we were told. Everyone else is supposed to go around the edge of the courtyard. We certainly don’t complain! We were then able to enjoy another VIP custom, having our photo on the palace steps!

There was a brief history lesson before we entered the palace. Built between 1718 and 1720 for the Count of Évreux, the former Hôtel d’Évreux was home to a number of occupants before the state purchased the palace in 1816, and since 1874 it has been the principal residence of the presidents of France. Over the years, every occupant has added their own personal touch and in 2018, the palace underwent major restauration work, as President Macron and his wife incorporated a bit of modern influence.

Our first stop was the entrance hall, home to the Arman sculpture Hommage à la Révolution de 1789 (homage to the 1789 revolution), commissioned by President François Mitterrand in 1984.

From the hall leading to the first floor where the President works is a marvellous staircase, built in 1806 for Prince Murat and his wife Caroline, sister of Napoleon Bonaparte. The gold-painted balusters recall the motifs of Napoleon’s empire, palm fronds and crowns of olive branches.

From there we entered the Salon des Aides de Camp (aide-de-camp room), named after the young officers who used to deliver generals’ dispatches on the battlefield. The doors, commissioned by Napoleon III in 1859, feature white and gold panelling with designs representing the four elements—water, earth, fire and air—and two seasons, spring and winter. We then moved to the Salon des Ambassadeurs (ambassadors’ room), so named as it was in this room that presidents used to receive ambassadors coming to present their letters of credence. These days, it’s the room where Emmanuel Macron presides over meetings of the Council of Ministers every Wednesday. Everything was already set up for the following day’s meeting. Next, we moved into a splendid little salon, the Salon Pompadour (Pompadour room). In 1753, Louis XV offered the Hôtel d’Évreux to his mistress, the Marquise of Pompadour. Paintings by Juan Miro and Pablo Picasso now hang amid the 18th century décor, a contemporary touch added by the palace’s current occupant. Then we entered the Salon des Portraits (portraits room) decorated with portraits of the great European sovereigns at the time that Napoleon III commissioned the paintings. Today, the room serves as a dining room. As we passed through, we admired the table set with magnificent Sèvres porcelain. It was then time to move to the reception rooms! We entered the Salon Murat (Murat room), a tribute to the prince who turned the classical hôtel into an imperial palace. The décor is reminiscent of Napoleon’s empire, and covering the walls are murals recounting Murat’s great battle exploits. A colourful, contemporary rug now covers the floor, boosting the atmosphere of the room in which the Council of Ministers used to meet. Next, the Salon Napoleon III (Napoleon III room), reserved for grand occasions such as the swearing in of the president, medal ceremonies and state dinners. In the corners of the ceiling nestle Napoleon III’s imperial eagles, to which later were added the monogram RF for République française (French Republic), complete with olive and oak branches.

Lastly, we moved to the magnificent Salle des Fêtes (ballroom), opened in 1889 by Sadi Carnot, president during the French Third Republic. The ceiling is richly decorated in the style of the late 19th century. Until the renovation in 2018, red fabric wall coverings and curtains hung throughout the vast room. Now in grey hues, the ballroom looks much brighter and more dignified. The curtains have been removed and pearl-grey panels have replaced the wall coverings. It’s a tasteful choice that focuses the eye on the painted ceiling.

That was it for the visit! We were able to move freely about the rooms as we pleased. Our friendly guide answered our many questions and helped us see that the Élysée is also a place of work. At the end, and with the utmost consideration, we were politely asked to leave the rooms, as the president himself was about to enter!