Ecole Boulle, between tradition and modernity 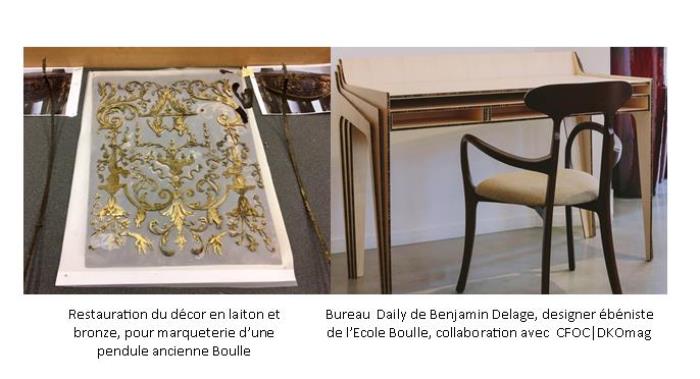 Named after Louis XIV’s celebrated cabinetmaker – between tradition and modernity.

At one of the most prestigious arts schools in Europe, we learn about passing on age-old expertise whilst encouraging creative freedom.

The Ecole Boulle was established in 1886 by the City of Paris in homage to Louis XIV’s celebrated cabinetmaker, André-Charles Boulle. He was the first to apply gilded bronze to his furniture and became famous for his inlaid marquetry, known today as Boulle Work

In 1969, the public institution became an Ecole supérieure d’arts appliqués (college of applied arts), also incorporating a high school for fine arts and crafts, interior architecture and design. The school is involved in several partnerships and exchange programmes, especially in Europe. Thanks to its excellent reputation, the Ecole Boulle welcomes numerous international students every year.

Today over a thousand students are enrolled across 13 workshops and classes, taught by 150 masters, themselves often former students called “boullistes”.

Thanks to the warm welcome shown to us by the Director and four of her colleagues, we were able to witness a real passion for teaching and for passing on age-old techniques. This commitment enables students to develop their own artistic projects and to enter into the professional world in their chosen fields, be that cabinetmaking jewellery-making, design, and so on.

Each year the students design their own piece in response to a theme chosen by their teacher, building it and presenting it to a jury at the end of the year. The students are helped throughout by their attentive teachers, their projects made possible by the tools and funding provided by the school.

The Ecole Boulle aims to promote respect for heritage and tradition, whilst at the same time embracing modernity and technological innovation.

By France Bussière and Marina Lafosse

From the jardin des Plantes to the Museum National d’Histoire Naturelle The Louvre Abu Dhabi: An opportunity for cultural diplomacy