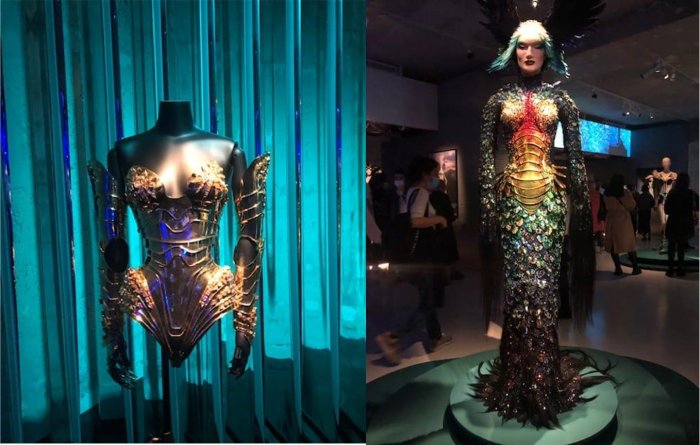 Designed to pay homage to Thierry Mugler’s artistic art, this exhibition displays 140 pieces for the most part never showed to the public, in addition to accessories, stage costumes, videos, photographs and sketches.

Like an opera, this exhibit reveals the multiple faces of a visionary, photograph, perfumer and dancer.

The first room is filled with creations inspired by birds, insects, reptiles and butterflies. Perfect techniques drive Mugler’s imagination as illustrated by the sumptuous dress with tortoise shells assorted with feathers at the entrance. Then you discover robots and uniforms whereby science fiction and the Middle Ages meet, foreseeing the evolution of transhumanism.

You then enter in Mugler’s laboratory of innovative and audacious perfumes which include a star-shaped bottle. Mugler’s universe also expands to the stage, the opera and the production of various commercials.

In the 70’s Mugler invented the “glamazone”, a style characterized by geometric shapes, square shoulders and laser-made figures. Images taken by most famous fashion photographers including Helmut Newton offer a testimony of this subtle elegance and cultural mix.

This is completed with pop music and a unique spectacle where renowned models are reunited in a “Too Funky” video clip.

Mugler could transform fashion shows into spectacles like those of Jean Paul Gaultier.

Mugler’s design of 70 costumes for the theatrical production of Macbeth at the Comédie Française in 1985 illustrates extraordinary techniques and flamboyance which characterize the multidisciplinary talent and imagination of this artist.

Walks on the heights of Paris, an unusual breath of the countryside! MasterClass