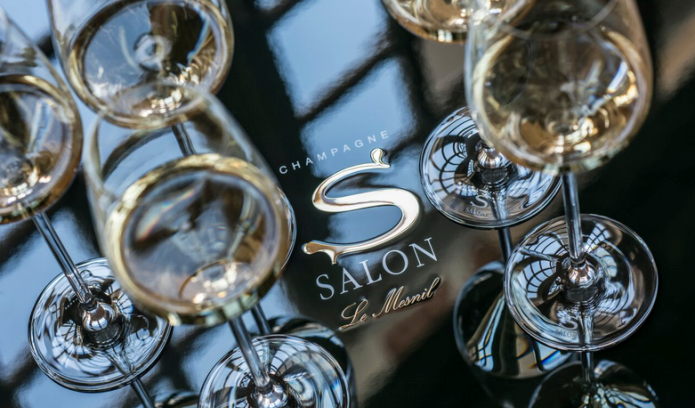 A day out in the Champagne region visiting the Smiling Angel

We had the honour of visiting the world famous vineyard that produces the Salon and Delamotte champagnes, situated in the village of Mesnil-sur-Oger near Reims, where we received a warm welcome from Didier Depond, President of the two houses. The Salon champagne was one of the first non blended Blanc de Blancs, made with Chardonnay grapes from one of the finest terroirs. Only the most exceptional years are produced as vintages. Over the last century, they have produced only one vintage every three years. Since 1990, wine is kept in the cellars for ten years — but they only go on to become vintages if they are of impeccable quality. We had a chance to visit the vaulted cellar, where are kept their best bottles.

Salon champagne is exclusive, with just 60,000 bottles produced in each vintage, of which 95% is exported, with Japan being the primary market.

After a fabulous visit around the house — one of the most exclusive in Champagne — a tasting session and an excellent lunch, we headed to Reims Cathedral, a classic example of gothic architecture. Construction of this impressive landmark began in 1211.

Today, the cathedral’s towers can be seen from all over the city, and its sheer beauty, magnitude and style leave visitors spellbound. Spanning 138 metres in length, with arches 38 metres high, it was the largest building in the Christian world at the time it was built. Adorned with 2,303 magnificent statues, the cathedral boasts a rich collection of medieval art — but the one piece that really stands out is the renowned “Smiling Angel”.

Clovis, King of the Franks, was baptised there by Saint Remigius on Christmas day, but the year is disputed — it may have been 496, or 499. Louis the Pious, son of Charlemagne, chose Reims for his coronation. Since then, all of the Kings of France — except Louis VI and Henry IV — were anointed at the cathedral, marking their accession to the throne. The building was vandalised during the French Revolution and King Charles X was the last to be crowned at the cathedral in 1825. Almost a century later, as World War I broke out, Reims and its cathedral suffered damage from German bombs. Struck by 25 shells, the building’s lead roofs melted and poured through the mouths of the gargoyles. Reims’ “martyred cathedral” was saved, however, when the French State, the city and its people — ordinary citizens, but also generous well known figures, such as John D. Rockefeller — rallied round to restore the heritage of France. We walked around the nave and chapels as the sun went down towards the end of the afternoon, admiring the blue-tinted light filtering through the stained glass windows designed by Marc Chagall, and the red pink hues of those designed by German artist Imi Knoebel.

It was here that General Charles de Gaulle and Chancellor Konrad Adenauer celebrated the Franco German reconciliation in 1962. In 1996, Pope John Paul II visited the cathedral to mark the anniversary of the baptism of Clovis. The imposing stone structure, listed as a world heritage site by UNESCO, certainly left its mark on all of us.