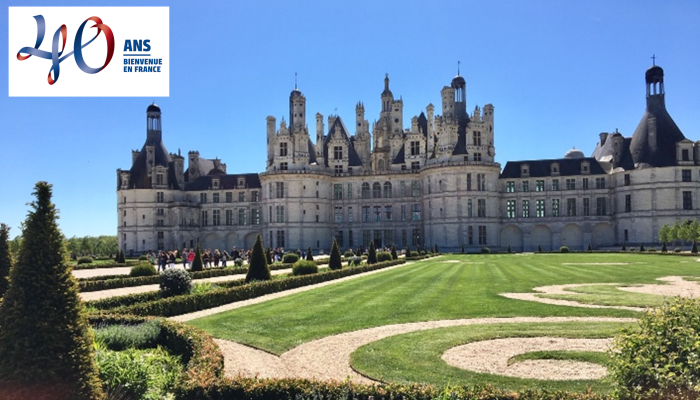 "From afar the building is an arabesque, evoking a woman whose hair is blown by the wind, move closer and this woman transforms into towers" wrote Chateaubriand.

To celebrate our association’s 40th anniversary, we couldn’t have dreamed of a more beautiful and rich experience than visiting Chambord. This château was the largest in the world when it was built in the Renaissance, its size pre-empting that of the future Palace of Versailles. Its architect was Leonardo da Vinci, who arrived in France with King Francis I when he returned from Italy in 1519. The King and his sister, Marguerite de Navarre, showered him with their fervent affection. The King offered Leonardo the Clos Lucé manor in exchange for the pleasure of conversing with him every day and named him “The King’s first painter, architect and engineer”.

The Mona Lisa on the back of a mule

Da Vinci did not arrive empty-handed. He had brought three of his favourite paintings from Rome, transported in leather saddlebags on the back of a mule: “the portrait of a Lady of Florence” (otherwise known as the Mona Lisa), Saint Anne and Saint John the Baptist.

We received a royal welcome thanks to the kindness of the managing director of the estate. First, we were treated to lunch in the magnificent Room of the Hunters, recently restored for a visit from the French president. Then, led by two very talented guides, it was time to visit the château. The first highlight was the famous double-helix staircase, composed of twinned ramps twisting one above the other around a hollowed out, partially open core. When two people use a different ramp at the same time, they never cross paths. Allegedly, Louis XIV’s cousin, known as La Grande Mademoiselle, took great pleasure in playing this game with her father Gaston, Duke of Orléans! On the first floor, a series of rooms decorated by Jacques Garcia give an idea of the different decor and furnishings used over the centuries. On the second floor, the four vaulted rooms surrounding the central staircase, like ancient triumphal arches, are adorned with the emblems of King Francis I – hundreds of monogrammed “F”s and sculpted salamanders.

Royal fleur-de-lis for an estate owned by the Republic

At the top of the main staircase are the terraces, a large space for strolling with a breathtaking view of the rooftops, where flamboyant Gothic architecture meets the Italian Renaissance. In the centre of the keep stands the lantern tower, topped with a royal fleur-de-lis. On the way we were given a sneak peek into rooms that are not usually open to the public, in particular the majestic forest of beams under the rafters, similar to those at Notre Dame. Up until the 19th century, this jewel of the Renaissance welcomed kings, emperors, princes and artists. It was here that Louis XIV invited Molière and his troupe to perform “Le Bourgeois Gentilhomme”.

The French Republic acquired the 5,440-hectare walled forest estate in 1930, the largest of its kind in Europe. With a surface area equivalent to that of inner Paris, it welcomes around one million visitors each year.

Chambord has established partnerships with prestigious sites around the world: the Summer Palace in China, the City Palace in Udaipur, India, and the Palace of Venaria in Turin, Italy.

During the Second World War, several artworks were stored at Chambord for safekeeping – including the Mona Lisa, who came full circle!