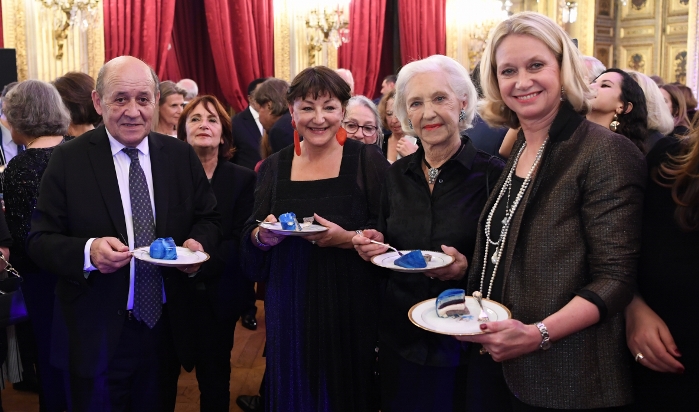 The Minister of Europe and Foreign Affairs, Jean Yves Le Drian, said, “My wife Maria, the honorary BEF President, and I would like to welcome you all to Quai d’Orsay for a special evening.”

And what a special evening it was! Four hundred foreign diplomats and their spouses attended the 40th anniversary celebration of Bienvenue en France at the Ministry of Foreign Affairs at Quai d’Orsay. The association is driven by youthful energy, much like its Founding President, Marie-Thérèse François-Poncet, and the dynamic President, Amanda Gourdault Montagne, and Vice President, Véronique Debieuvre, as well as 160 volunteers. In a speech at the event, Amanda said, “Thanks to our family of volunteers, Bienvenue has been running for 40 years. Openness, hospitality and sharing are values at the heart of French culture and tradition. Tonight, we celebrate France’s cultural influence, and this sense of sharing and friendliness.”

After emphasising that "hospitality and joie de vivre are also part of French heritage,” the Minister said, “our world has changed considerably over the last 40 years. But this changing world still needs diplomats, who represent the human side of international relations — and can only do so by getting to know the culture and beliefs of the people they encounter, even if only to a certain extent. Bienvenue en France has welcomed foreign diplomats posted to Paris, as well as their spouses, to introduce them our rich cultural heritage for 40 years. The President of the Republic likes to talk about a certain ‘art of being French’. I think there is also an art to being a Francophile. And, thanks to Bienvenue, you are all taking excellent training!” The Minister also highlighted “regional France”, a particular focus of Bienvenue. “The France of tomorrow is being created outside the capital; I’m thinking particularly of our innovative companies, and the cultural vitality of our cities,” he said, mentioning the Organic World Congress, which will take place in Rennes in September 2020. He urged the guests to try organic products from Brittany with the “Be Reizh” label, the debut of a delicious array of specialities from nine regions overseen by Marie-Reine Fischer, the President of Destination Régions, a federation for the French tourism industry.

An immaculate troupe of students from the famous Parisian school of cuisine, Ferrandi, had been handpicked by the school’s President, Bruno del Monte, to attend to the buffet tables. Not a button out of place, they stood to attention alongside their culinary creations. Upon entering the Ministry reception rooms, guests were greeted by two orderly lines of waiters and waitresses in white gloves, serving Vranken-Pommery champagne on one side and soft drinks on the other. More casually, 30 volunteers welcomed guests at the top of the steps which, like the reception rooms, had been adorned with roses from Maison Georges Delbard.

The event kicked off with the arrival of a seven tiered cake created by Muriel Béal, a young pastry chef and volunteer teacher of Bienvenue’s cooking classes. The jazz orchestra of the Republican Guard, kitted out in full uniform, gave a passionate performance of Happy Birthday, and Mrs Le Drian blew out the candle on the cake. The culinary delights of the evening included oysters from Arcachon-Cap Ferret (Nouvelle Aquitaine), foie gras with Gewürztraminer wine and pear confit (Grand Est), Sisteron lamb by the Michelin starred chef Jany Gleize (Provence-Alpes-Côte d’Azur), cheeses by Marc Janin, holder of the Meilleur Ouvrier de France distinction for extraordinary craftspeople (Bourgogne-Franche-Comté), herring hors d’oeuvres accompanied by a cocktail of Bénédictine liqueur and Calvados (Normandy), a foie gras flan (Centre-Val de Loire), charcuterie (Corsica), specialities from Occitanie, and many more.

And the party was still not over. The Republican Guard played music and the guests danced. When leaving the Ministry, the ladies were given jewellery from Les Georgettes by Altesse – a shining gift from a warm and joyful anniversary party. After all, it’s not every day that Bienvenue turns 40!

A journey through the valley of the Rhône and Languedoc tasting some exquisite and surprising wines. Francis Bacon