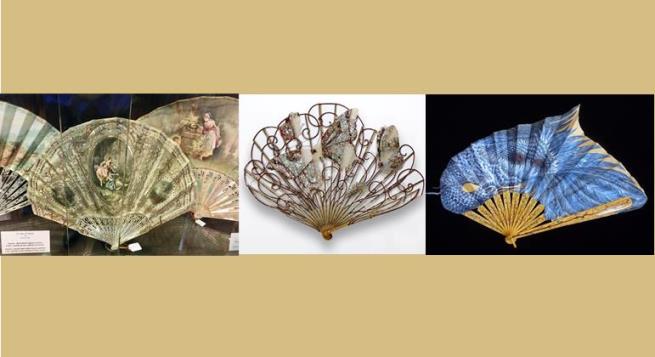 “A protector of purity as much as a symbol of seduction, the fan is able to both conceal and call attention to the face. It can mask a look, a smile, an inhibition or a feeling of pleasure. Profoundly feminine, the fan conveys an air of refined sophistication.”

Anne Hoguet received us in her workshop and took us around her museum, which boasts a magnificent collection of fans. Honoured by the Ministry of Culture with the title of Maître d’Art in 1994, she creates and restores fans for opera, theatre, cinema and prestigious designers including Dior, Gaultier, Hermès, Lacroix, Nina Ricci and Louis Vuitton.

In 1876, Joseph Hoguet Duroyaume set up his workshop where he produced fan mountings. Four generations later, Anne continues to perpetuate the family tradition of making leaves and mountings for fans. The profession requires her to harness a range of skills that in the past were practised by separate guilds of artisans. Anne took over from her father, Hervé Hoguet, who in 1960 bought the premises of a prestigious 19th-century fan maker, the Maison Kees, which was established back in 1805 at 2 boulevard de Strasbourg in Paris.

The mountings are made from precious materials such as mother of pearl, tortoiseshell, bone, horn or precious wood. They are crafted, sculpted, perforated, guillochéd, engraved and inlaid with gold. The leaves, made of hand-painted fabric, lace, sparkles or feathers, are then added to the mountings. The fan maker is often also an adept artist, pleater, lacemaker and designer.

The Musée de l’Éventail, which we had the privilege of visiting, holds a vast collection of fans, boasting over 2,500 pieces dating from the 16th century through to the 21st century. Opened in 1993, the museum is located in a 19th-century bourgeois-style building. The room has been conserved in its original Henry II style with an elaborate fireplace that dominates the space and sculpted walnut cabinets and vitrines that contain the spectacular collection.

Before we left this unique and magical place, Anne Hoguet spoke to us about her strong desire to pass on her savoir faire and passion to safeguard the future of this form of art and the museum dedicated to it.

People wishing to visit the museum must book ahead at www.annehoguet.fr/en

Degas at the Opera The stage, the dressing rooms, the lights, the audiences…. the dancers! Parc Monceau and its 18th century follies