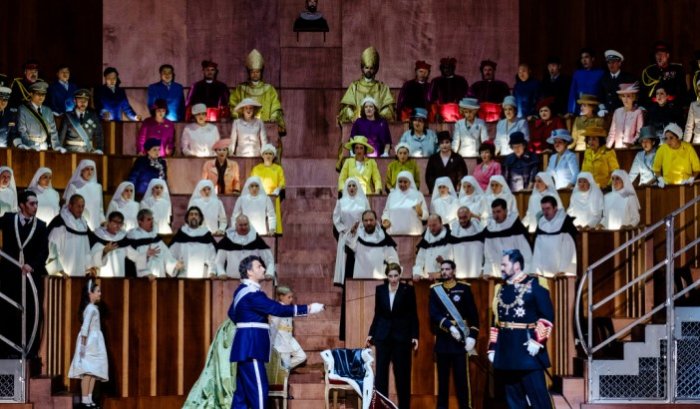 Directors put together an outstanding season to honour the 350th anniversary of the Palais Garnier and the 30th anniversary of Opéra Bastille. Though we chose a diverse mix of performances to attend, we prioritised those held at the older, more sumptuous venue built by Charles Garnier. Although Palais Garnier opened in 1875, it still held a few surprises in store for our visits; for example, two new decorations featured on the grand staircase – a pair of enormous golden tractor tyres! An unexpected centrepiece that nevertheless fit the setting perfectly.

Opéra Bastille opened the season with a major piece that wasn’t to be missed, Verdi’s “Don Carlo.” We were lucky enough to attend the premiere, sung by the fantastic real-life couple Roberto Alagna and Alexsandra Kurzak. The legendary pair portrayed the star-crossed lovers Elisabeth of Valois, daughter of the king of France, and Don Carlo, the Infante of Spain. Similar to Verdi’s “The Force of Destiny,” the historical context pits the romantic devotion of the heroes against the powers that be. The power of love against the love of power – a combination that always makes for brilliant romances. The coupling of her pure voice and his powerful presence captivated the audience, and we were glad to witness such an excellent performance. The magic of the great operas won the day yet again – and we were thankful it did, as strikes and the coronavirus thwarted the remainder of our schedule at the Palais Garnier. I regret that what follows recounts what some of us had to miss due to last-minute cancellations.

At the Palais Garnier, some made it to a performance dedicated to two of the most illustrious French composers of the 20th century, Ravel and Debussy. It featured Ravel’s “L’enfant et les sortilèges” (the child and the spells), an opera with a libretto by Colette, who had asked Ravel to create a ballet for her granddaughter, followed by Debussy’s “L’après-midi d’un faune” (afternoon of a faun) inspired by a poem by Mallarmé. The theme of both pieces is children’s imagination.

Then came a second strike by the staff of Palais Garnier, keeping us from seeing “Giselle” – a quintessential romantic ballet created in 1841 with a plot written by Théophile Gautier, inspired by a Victor Hugo poem. Unfortunately for our Chinese friends, coronavirus kept them from being able to attend a performance at a later date.

Luck was not on our side this year so, dear opera aficionados, let’s look forward to the fun we’ll share during the next season.