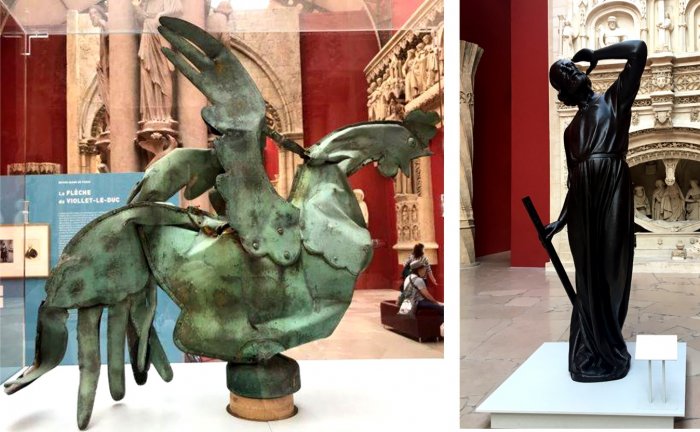 The spire, the sculptures of the cathedral and the dented rooster, all so lively!

Their survival is miraculous... They escaped the flames, having been removed from the cathedral just 3 days before the fire ravaged Notre Dame: the statues of Saint Peter, Saint John and the 12 apostles that were designed and installed by Violet Le Duc in 1861.

As we now see them fully restored, it is the first time we can actually gaze into the eyes of the apostles that used to be perched 43 metres high, and admire this magnificent restoration which the Museum of Heritage and Architecture, place du Trocadero, has opened up to the public. SOCRA is a company specialised in the restoration and the technique of embossed copper, located in Marsac/ l’Isle, near Périgueux in the Dordogne. It took 2 years for SOCRA to return the statues to their initial aspect that Violet Le Duc had in mind. Violet Le Duc was selected as the architect, following a competition which Victor Hugo initiated for the restoration of Notre Dame in the 19th century, from 1843 to 1879.

First the corroded internal framework was consolidated, and then the assembled copper sheets were covered with a special paint and Teflon (a chemical coating) to avoid erosion. It is very moving to notice all the details of these sculptures, as well as the draperies and expressions of the apostles, and to recognise Violet Le Duc within the features of St. Thomas. Last but not least, there is the rooster…that was found on the ground among the charred rubble when the spire fell down. Such emotion! Although it is dented, this rooster seems so alive and contemporary with its pure lines that one would believe it to be sourced from a 21st century workshop! It contained relics too. These were preserved since they had been removed and entrusted to the care of the assigning clergy. Yet another miracle!

This stunning exhibition sheds light on our heritage, on the know-how and excellence of our French companies, while reminding us of those hours of havoc and drama that the fire had caused.

By Anne SERES - France, History and its institutions