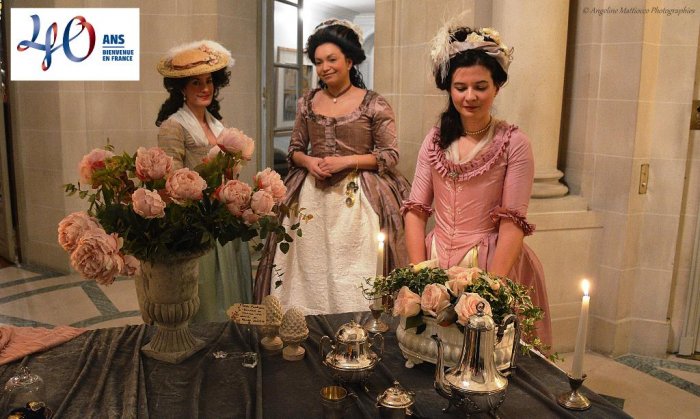 "Fashion and history come together in a sumptuous Parisian palace"

The fashion show was the final, golden evening celebrating the 40th anniversary of Bienvenue en France! H.E. the Chilean Ambassador Mr. Juan Salazar Sparks and his wife, our friend Karen, invited us to the Hôtel de La Tour d’Auvergne for a celebration of 18th century fashion, known as the Great Century of Louis XIV. The lavish décor of the Parisian palace was an ideal setting for the elegant attire on display. Under the vibrant, expert direction of Pauline Bord, PhD in history and founder of event company Histoire Retrouvée (“history rediscovered”), around twenty models turned back time to allow us to admire the fashion of the 18th century. The insightful and captivating commentary provided by Pauline helped us gain a deeper understanding of these pieces that once enthralled the royal courts of France and Europe. Foreign influence did make its way into the show, namely that of the practical English and their preference for comfort during the period.

They didn’t shy away from plunging necklines, or jewellery for that matter; indeed, the women wore from the head all the way down to the diamond-encrusted shoe buckles.

Among the many pieces, a few in particular stood out:

a sack-back gown worthy of a Watteau painting with its large pleats in the back.

a shortened skirt for more comfortable walking in English gardens—and more hygienic, as prescribed at the time by one Dr. Tronchet—leaving the ankle delightfully visible.

a cotton dress with a finely embroidered apron for women of more modest fortune. The hairstyles also showed great variety, with formal marteaux curls, pinned down on the sides of the face, as well as soft curls favoured by English women at the time. One particularly touching hairstyle was the coiffure à l’enfant (“child’s hairdo”), which had been created for Queen Marie Antoinette after her hair began falling out once she gave birth to the prince. There were also two elegant male models, one in the uniform of the Garde du Roi (“king’s guard”), a magnificent blue with silver tassels, and the other a nobleman with short hair and a moustache, sporting a more modern outfit typical of the 19th century.

We ended the evening tasting the excellent Chilean wines from the Baron Phillippe de Rothschild’s Escudo Rojo vineyards, offered to us by the ambassador with tasting commentary from the director of client accounts at the Rothschild wine company.

After all, elegance and fine wine do go hand in hand !

A welcome escape with “Dreaming” by Schumann Élysée Palace